A Curious Beginning, indeed!  I am not familiar with the author, Deanna Raybourn, at all, but this book had such great reviews, and - well, let's face it - I'm a sucker for a mystery series with a strong female protagonist. And, it seems lately, I'm also becoming a fan of female detective stories set in the 19th century - first there was the Lilly Long series, then the Change of Fortune series, and now the Veronica Speedwell series.  So long as these authors provide such enjoyable reads like this, I'll continue to be a fan!

From the very first chapter, it was clear that I was going to absolutely love Veronica Speedwell - not just the book itself, but the character.  Raybourn provides readers with a very outspoken, blunt, and undeterred young lady who is set upon making her own destiny and will not allow anyone to try and change it.  This becomes quickly apparent in just the first eight pages when Veronica must confront the unwelcome plans of the vicar's wife. 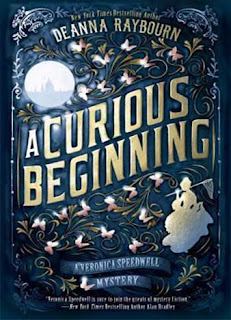 And that one simply quote pretty much sums up Veronica's nature.  Of course, considering the fact that just as she loses her last aunt, the only caretaker she had left, she finds her home ransacked, she is nearly kidnapped, she is whisked off to London by a man she doesn't know, she is thrust into the care of an ill-tempered historian, and she suddenly finds herself the target of person or persons unknown, that rather impudent disposition of hers definitely serves her needs time and time again.

Raybourn spins a really intriguing mystery of who killed the Baron Maximilian von Stauffenbach (you gotta love these character names in the book!), why did they kill him, how does it connect to Veronica and her past, and why, oh why, do they now want to kill Veronica?  It seems it is up to Veronica and her new comrade-in-arms, Stoker (a/k/a Revelstoke Templeton-Vane) to figure it all out before it's too late.  But, they find themselves on the run, hiding out in the most unlikely of places (including a traveling oddities show of which Stroker used to be involved).  While both Veronica and Stoker's pasts are shrouded in mystery, as the story progresses, Raybourn reveals bits and pieces.  And the budding friendship (possibly more?) between Veronica and Stoker definitely provides plenty of tension throughout the tale, as they never know whether to scream at each other or take the other in his or her arms.

The ultimate resolution of this mystery is just a bit of a stretch, but it does make sense in a very fictional sort of way.  And Raybourn is careful not to reveal all of her characters' secrets, leaving her readers wanting for more (which I am sure will come in future books - A Perilous Undertaking is already out in hardback, but my cheap self will wait for the paperback to hit the shelves).  This book is clear evidence of why Raybourn is a New York Times bestselling author.  The story is perfectly paced, with plenty of action and characterization to pull readers in and keep them engaged in the story, and the mystery is well plotted, with clues scattered throughout if you know how to recognize them (plus, knowing a bit of history helps, since the author manages to utilize some real historical facts mixed in with her fiction).

A Curious Beginning is just that - a beginning!  I anxiously await to see where Veronica and Stoker will go next!

RATING:  10 butterfly nets out of 10 for proving that even in the 19th century, a woman can be intelligent, independent, and utterly incorrigible - and still be enjoyable to read!