Writer Aaron Lamont brings us back to the story of Sabrina Jennings and Cyrus Longworth, and ties up some loose ends involving Alfie Chapman (remember him from Beneath the Veil?) and his girlfriend, who is now possessed by the spirit of Danielle Roget. While these may seem like an unlikely foursome, Lamont weaves a well-crafted tale of pure evil and mournful regret that brings these four together for a night of pure terror.

Deliver Us From Evil opens with Amy Cunningham running into the last person in the world she wants to see - the woman who killed her brother! But when the two get stuck in an elevator together, Sabrina tells Amy the story of how she nearly brought the darkest evil into the world... 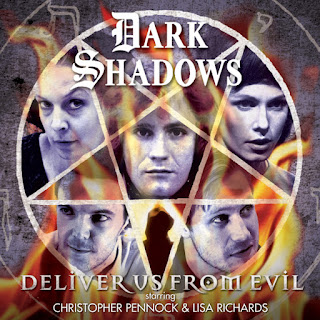 Told in flashback, this audio book completes the story that began in Beneath the Veil, with Alfie Chapman and his girlfriend, Emma Finney (who is now possessed wholly by the evil spirit of Danielle Roget, the French murderess). They are still on a killing spree, but there is more to be had. Alfie himself is beginning to have episodes of possession - episodes in which he is willing to give himself over to the son of the Dark Lord! But it seems that demon is toying with him, just as he is toying with Cyrus Longworth, convincing Cyrus that he is stronger and will eventually take over his body completely.

Meanwhile, Sabrina has found a way to rid herself of the werewolf curse - and she is determined to help Cyrus rid himself of the evil "John" that lives within him. Her deceased husband, Chris Jennings, appears to her and tells her where she needs to go to and what she needs to do.  At the same time, the son of the Dark Lord is leading Alfie and Danielle (Emma) on a trip as well - one that will ultimately lead to a final showdown as the son of the Dark Lord sets up the pieces to finally unleash the apocalypse on Earth!  It's a final battle of good vs. evil as Sabrina and Chris do battle with Aflie, Danielle, and "John" (revealed to really be the son of the Dark Lord), and should Sabrina and Chris lose, so will the whole world!

The story is chock full of the supernatural elements that make Dark Shadows what it is, and the dialogue and emotions remind us just how human these characters really are, even while facing unfathomable evil.  The writing is exceptional, as the story flows smoothly and builds dramatically to the big battle at the end, and you easily begin to care about Sabrina and Cyrus, longing to see them both released from the curse that haunts them.

With Lisa Richards reprising her role as Sabrina Jennings and Christopher Pennock returning to the role of Cyrus Longworth, listeners will definitely feel like the show has returned in all its glory.  This tale is a reminder of just how good these audio books can be.

RATING:  10 holiday shopping sprees at Ohrbach's out of 10 for bringing to a satisfying conclusion a stories begun 13 and 14 audios prior!
Posted by TL at 3:14 PM