The star of one of CW's best shows hits the young adult section of the book store in this all new series!  While I've never actually been a fan of the comic book character, The Flash, I really do love the television show.  The stories are well-written (albeit a bit long with these season-long storylines), and the acting is superb.  They have an amazing cast, who seem to really gel and have natural camaraderie.  So, I bought this first young adult novel with the anticipation that it would be just as fun as the show.

And, for the most part, it was!

The Flash: Hocus Pocus tells the story of what might have happened had Iris prevented Barry Allen from going into the past to save his mother.  The timeline did not change due to Flashpoint, and Barry and all of his friends maintain their status quo.  Life seems idealistic, and everything is running smoothly ... until Caitlin and Cisco happen across a street magician who appears to have the ability to make his audience do what he wants - adore him!  This man who calls himself 'Hocus Pocus' is able to control his audience, making them applaud and praise him for even the simplest of tricks.  Lucky for the citizens of Central City, that control is only temporary and eventually fades. 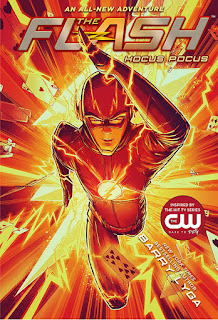 But what happens when he gains control of the Flash, and the control doesn't fade?

Author Barry Lyga takes readers on a fun little "what if?" story, showing what Flash would have been like if he had not gone back in the past and tried to save his mother.  Of course, that doesn't mean he won't face a maniacal villain.  And it certainly doesn't mean he won't make mistakes that will get him, and possibly his friends, in trouble.  But, it does mean that Caitlin is not Killer Frost ... yet.  It does mean that Cisco's brother is not necessarily dead ... yet.  And it does mean that Barry Allen may have an entirely different set of problems to deal with at work - such as Captain Singh deciding he has had enough of Barry's numerous absences, unexplained tardiness, and, even though he always gets his work in and does an excellent job, his multitude of excuses.  You see, in this book, Barry is put on leave until the department decides whether they are going to keep him on with a warning or terminate his position.

And just when Hocus Pocus has come to town and begun controlling people, making them do exactly what he wants.  Is he a meta?  Or is he simply so technologically advanced, he has a device (say, a wand) that allows him to reach into the minds of those around him and cause them to bend to his will?  Or, and this is the one that Barry and his crew have a hard time swallowing - is it truly magic?

Once Hocus Pocus gets a hold of the Flash, he doesn't intend to let go!  Suddenly, the Flash finds himself at the beck and call of this attention-starved madman!  He cannot touch him, he can't defeat him, and when he is forced to rob a jewelry store in front of hundreds of Central City citizens, he finds himself the target of the Central City Police!  Cisco and Caitlin cannot figure out how he is doing this, and H.R. seems only concerned with the Flash's marketing.  How are they going to stop Hocus Pocus, restore the Flash's reputation, and get Barry his job back?

And what is it with these odd bodies that are turning up dead with missing organs?  Does it have anything to do with something that is living down in the sewer?

A definitely episode-worthy story of The Flash, and a book well worth the read for any fans of the television show!

RATING:  9 inverse transmitting neuralgic transformers out of 10 for a well-crafted tale and for bringing Madame Xanadu into the CW television universe!
Posted by TL at 9:14 PM