A Viv and Charlie Mystery, Book Two - Homicide for the Holidays

This book made me realize exactly why it is I love "series" books so much, rather than just stand-alone stories.  It's because, no matter how long between each book, the minute you pick up the next book in a series and start reading, it's like catching up with old friends.  And while it took me a while to pick up the first book in this series, The Darkness Knows, after reading that one, I didn't hesitate to buy the second book the moment it hit the shelves!

Homicide for the Holidays brings back radio celebrity Vivian Witchell and private detective Charlie Haverman, this time to solve a crime that hits close to him for Viv.  This time around, Viv does not stumble across a dead body - instead, she find a key, that leads her to a locked drawer, that opens up to reveal an envelopes stuffed with cash ... and a threatening note!  Viv's father passed away some some time ago, so why did he have an envelope full of cash in a locked drawer of the desk in his study?  And who would threaten him?  Or was he threatening someone else?  The mystery deepens even further when the envelope, cash, and note disappear - but yet another key is discovered taped to the backside of the drawer!  What does it all mean? 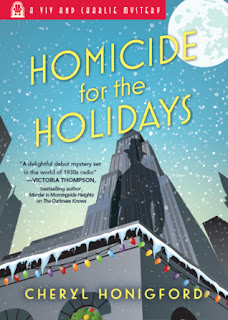 Author Cheryl Honigford provides a mystery full of twists and turns, constantly flipping the readers thoughts on what kind of man Arthur Witchell was.  We follow along as Viv traces the last few weeks of her father's life, trying to uncover the truth, no matter how horrible it may be, and as every layer is pulled back, it seems that there are more and more secrets to be unearthed - not just about Arthur Witchell, but about his law partner, his clients, and the secret life that he kept from his family.  Of course, it's not all fun and mystery-solving for Viv - remember, she's a big radio celebrity now, starring in that radio show, "The Darkness Knows," with Graham Yarborough, the radio channel's big star.  Plus, the public at large knows how close Graham and Viv have become - the only problem is, it's all for show.  Viv still yearns for Charlie, who has been conveniently absent over the past few months since they solved the murder in the previous book.

Before you know it, Charlies comes back on the scene to help Viv track down the truth about her father - but he keeps her at arm's length because of her relationship with Graham.  Viv wants to tell him the truth, but can't because if it gets out the relationship is a fake, it could ruin both her and Graham's career, not to mention the station's number one rated show.  Of course, what Viv doesn't know is that Graham has a secret of his own - one that made him a suspect of the murder in the last book, and one that, if it comes out, could very well spell his end in this one!

And if all of that is not enough to whet your appetite for a good mystery, let's add into the mix a nosy housekeeper, a lovestruck brother, a determined reporter wannabe, an old crush who returns to the scene, and a legal secretary that unwittingly holds the secret to unraveling the truth about Viv's father's death, and suddenly you have a story worthy of a daytime soap opera - or in this case, a radio serial!

It's so enjoyable to step back into the past (the 1930s in this case!) and see just how much simpler things were back then.  No cell phones, no computers, no technology to control our lives.  People talked, they went to dances, they held impromptu parties, and for mysteries like this, they find themselves in danger with no way to text or call someone!  Footsteps following behind on a darkened path ... coming home to find your house ransacked ... a car screeching around the corner just as you step off the curb ... and accidents made to look like accidents when they aren't really accidents.

All in all, book two in the Viv and Charlie series was even better than the first!  That definitely sets the bar high for book three, due out later this year...

RATING:  10 Kewpie dolls out of 10 for taking radio drama mystery and bringing it to life so vibrantly!
Posted by TL at 11:30 AM