CW's The Flash returns in his second young adult novel, Johnny Quick.  And before you ask, NO, the title does not refer to the World War II hero by the same name (unfortunately).  That is certainly what I was hoping for, but no - the title refers to the villainous speedster from the opposite-Earth, Earth 3 (well, okay, it was Earth 3 in the comics - but in the CW realm, it is actually Earth 27, since Earth 3 is inhabited by Jay Garrick Flash - yeah, try not to dwell on it, or you'll just get confused...)

Anyway, Barry Lyda, who brought us the first novel, Hocus Pocus, continues the story of Barry Allen and his friends as they begin their search for the magician who somehow disappeared from the Pipeline. Plus, they are beginning to deal with the Earthworm problem as well.  (And speaking of Earthworm, I'm rather thrilled to see this villain used, as the character first appeared in a Huntress back-up story in the pages of Wonder Woman back in the 1980s!) And so the story opens... 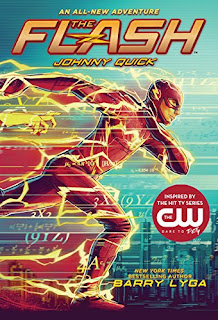 Earthworm is claiming another victim while Team Flash tries to revive a near comatose Cisco (a/k/a Vibe).  Cisco has been working overtime to figure out how Hocus Pocus' so-called "magic" technology worked, and after days of non-stop, caffeine-filled work, he fell into a comatose sleep.  So, while Cisco remains in la-la land, Barry (a/k/a The Flash) decides to do take a side-trip to Earth 2 to visit Harrison Wells, who might have some ideas on the Hocus Pocus tech.  Meanwhile, Wally (a/k/a Kid Flash) will work on the Earthworm case.  Sounds easy, right?  Well, if you've seen any episodes of CW's The Flash, then you know nothing every goes quite as planned!

(SIDENOTE - I love the author's use of Madame Xanadu, a much underused character in the DC Universe.  Plus, while making his trip through the multiversal highway to Earth 2, it's fun to "see" the different worlds that Barry glances along the way: Supergirl on Earth 38; a boy with long blond hair fighting a bipedal lion (Kamandi?); a man with a glowing green ring on his hand (Green Lantern!); a rabbit in a cape and unitard (Captain Carrot!!!!); a man and woman smaller than mice wearing red capes (Doll Man and Doll Girl!). Sure, they have only been glimpses, but just those quick, Easter-Egg references make the fanboy in me totally geek out!)

Back to the story - Flash, through happenstance, ends up on a completely different Earth, one that is wholly unfamiliar to him. Where everyone seems to be afraid of him. And where he finds tombstones for Cisco.  And Caitlin.  And Iris.  And Wally.  And just about everyone else he cares about.  He heads back to S.T.A.R. labs, only to find it has been walled off - and with guards at the top who shoot at him for simply coming near the wall!  This is definitely not Earth 2!

With the help of Captain Cold and Heat Wave (who, believe it or not, are the good guys!), as well as the Trickster and the Pied Piper, as well as the Weather Wizard (talk about an Earth of opposites), the Flash goes head-to-head with Johnny Quick - - and loses!  His only help seems to come from Madame Xanadu.  But how is she on this Earth as well?  Barry doesn't have time to ask, for it's off to the races (literally!) as he not only uncovers the true identity of Johnny Quick (hint! hint! it's not who you think it is!), but also fights to save all of Central City from the thralls of a power-hungry, speed demon.

Meanwhile, back on Earth 1, Wally takes on the Earthworm - - and loses!  (What is it with the loser Flashes in this book?)  With Wally missing, possibly in the hands of the Earthworm, Cisco literally beside himself (read the book and you'll find out what I mean!), and the Flash ready to head off for the future to uncover the secrets of Hocus Pocus - well, it's the perfect episodic cliffhanger, leaving readers ready for the next book to come out already!

If you love the TV show, then you'll love the book.  What are you waiting for?  Go get it!

RATING:  10 speed formulas out of 10 for a fast-moving, chock-full of surprises, well-written story that very much felt like I was watching an episode on the CW - loved it!
Posted by TL at 6:41 PM