DC Super Hero Girls, Graphic Novel No. 6 - Out of the Bottle

The girls of the DC Universe return for their sixth graphic novel, still written by Shea Fontana - however, the art this time is by not one, not two, but THREE different artists - Marcelo DiChiara, Agens Garbowska, and Mirka Andolfo (none of whom I recognize). And if you're wondering why there are different artists for one graphic novel, well, it all has to do with the story...

This time around, the Super Hero Girls find themselves in art class, under the tutelage of June Moon, and they are each creating their very own comic. It is actually rather cute to see the different comic creations the girls come up with - Katana, of course, writes herself as the shining star of swordshmanship; Supergirl writes the innocent tale of best super-friends Supergirl and Batgirl; Wonder Woman has a difficult time with her story about herself splitting into different versions to save the day; and Harley Quinn - - well, poor Harley just comes up with the most bizarre version of herself that she can think of - H.Q. as a villain!  (Yeah, not quite the surprise for readers.) 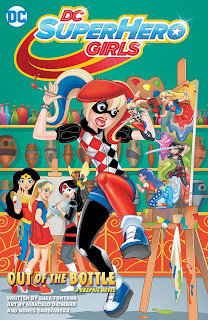 Nothing too exciting about any of that, eh? Well, when Harley accidentally uses some of Ms. Moon's magic pain, suddenly all of their comic creations come to life, and the two-dimensional pests are out to create as much havoc as they can on the real world! Harley, Supergirl, Wonder Woman, and Katana must stop these dopplegangers before they do too much damage to Metropolis.  Meanwhile, Ms. Moon does everything in her power to keep her cool, but eventually, she can't control her temper, and when she loses it - well, enter: the Enchantress!

It's a somewhat simple, straight-forward tale of mayhem and magic, and the girls get help from Cyborg, Beast Boy, Bumblebee, Starfire, Poison Ivy, Killer Frost, and even Black Canary makes an appearance! But ultimately, it is up to Harley Quinn, who created the havoc, to find a way to send the paper pests back into the comics where they belong (and, I'll admit, the solution was rather cute).

Shea Fontana tells another fun tale, and with six graphic novels under her belt now, she has a pretty firm grasp on all of the characters.  There is consistency and a bit of growth with them, as they learn from each experience, and it actually makes me smile to thing that DC is willing to put out light-hearted stories that, in some ways, remind me of the enjoyment I had reading Super Friends back in the '70s and early '80s. Which goes to prove that comic books do not have to be all dark and gritty for adults and super-dumbed down for kids - there is a happy medium!

Despite the regular artist, Yancey Labat, being absent from the book, the art is pretty spot on. Whichever artist did the main art for the story maintained the look for the characters and backgrounds. This is a pleasant surprise, as often when titles have fill-in or new artists, the artists will have a very different art style that can sometimes be jarring to the story, to see the characters drawn so differently.  DC made the right choice this time.

I hope this series is selling well enough to keep it going for a while - I think it is the type of comic the market needs, as some people like to actually smile when they are reading their comics!

RATING:  8 manifesting mights of maximum friendship out of 10 for good, clean, family fun!
Posted by TL at 3:30 PM