A Ted Wilford Mystery, no. 5 - The Empty House Mystery

Like the Judy Bolton series, the Ted Wilford series finds its lead character (and his friends) growing older with each book. While so many children's mystery series have the protagonists at a stagnant age (forever eighteen in the olden days, and now it seems the lead characters are fifteen, fourteen, and or some cases, even younger!), author Norvin Pallas decided to allow Ted to age naturally, and in this fifth book of the series, Ted and his best friend, Nelson, are graduating high school with all of their classmates.

The Empty House Mystery actually has a really interesting, and surprisingly political, plot that kept me guessing. Pallas begins the story with Ted and Nelson helping a stranger search for his missing dog outside of the local theater - a stranger who oddly enough recognizes Ted and begins to ask him questions about a new highway that is being planned to come through the nearby town. Ted doesn't really have any information, but finds it strange the man knows him. When he follows up on it, however, he discovers the man doesn't exist! 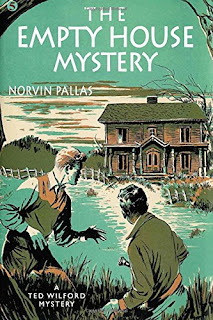 And with that, readers are off to the start of a mystery that winds its way through the newspaper, where Ted is helping out for a few weeks while Mr. Dobson is in the hospital, to an empty house with a ringing phone, to an allegedly haunted house where Ted and Nelson get stranded, to a new housing development with yet another empty house and ringing phone. And be prepared, because it seems everyone in this story is harboring one secret or another. First, there's the stranger with no dog. Then there's the man who places an ad for a lost red leather notebook, followed by the nervous woman who turns in the lost notebook. Let's not forget the state auditor, who is filled with anger and sarcasm. And finally, there is the man from the Highway Department, who seems just a bit too authentic to be true. Poor, Ted - he's stuck in the middle of all of this drama, and one innocent attempt to be helpful by personally returning the lost notebook to its owner proves to be the catalyst that sets off a chain reaction of events like you wouldn't believe!

What I did think was a bit odd about the story, however, is that for all the sleuthing Ted and Nelson do throughout the book (I mean, let's face it - any good sleuth worth a grain of salt will stay in a haunted house overnight for the sake of solving a mystery!), it is ultimately not Ted at all who solves the mystery and figures out not only the importance of the stolen notebook, but also who was involved and why. Rather, it is Ted's newspaper rival, Ken Kutler, who makes the final revelation, in a several page monologue setting forth all the details. Of course, this isn't the first time that Ted did not solve the crime - in The Star Reporter Mystery, the story was centered around Ronald, Ted's older brother, and not Ted at all. This leads me to wonder if the author never intended for the series to be solely focused on Ted, but on the entire cast (almost like a soap opera).

In any event, it was still a really good mystery, smooth story-telling, and enjoyable characters. For someone who is not a huge fan of boys' mystery series, this one has really grown on me, and it's a shame the entire series has not been reprinted (as I have been purchasing the paperback reprints from Amazon and reading them).  If you like mysteries, then I would definitely suggest you check these out.

RATING:  9 mislabeled, penciled-in headlines out of 10 for reminding me just why the children and young adult mysteries of the '60s and '70s are still some of the best out there.
Posted by TL at 6:02 PM