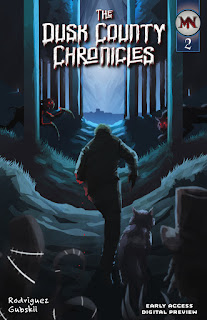 The Dusk County Chronicles returns for a second issue, thanks to the creative talents of Joel Rodriguez (writer) and Roman Gubskii (artist). The nightmares that plagued this small county are not over yet, as Rodriguez and Gubskii provide four more tales of terror, providing unexpected twists on somewhat familiar stories...only this time, Rodriguez goes beyond the well known into the little known fairy tales, children's stories, and folklore to give readers more chills than before!

The book begins with "A Mother's Love," a story about the lengths a mother will go to protect her child. The story opens with a women carrying a little boy, running through the woods with the realization that monsters are real.  A shadowy creature is chasing them, and the woman is determined to do whatever it takes to protect her child.  Night has fallen, and she knows she only needs to last until the break of dawn, at which point, the monster will be gone, and they will be safe.  Or will they? Remember, in The Dusk County Chronicles, everything is not always what it seems...oh, and if you are wondering what story this was taken from? Well, there's mention of a bag and an umbrella, so you figure it out...

"Niki" is a completely different sort of tale (or is that tail?).  Dan is in the hospital, unconscious.  Michelle is attending, and her friend, Eddie, who is a police officer, is there to keep her company.  When she tells him Frank is on the way with the equipment they need, Eddie becomes a bit concerned.  "Frank's coming?" he asks. "Does he still have that damn dog?"  The dog in question is Niki. And then the lights go out. And then there is a "thud" in the other room. And then Frank shows up, bloody, missing a hand, with Niki. You see, Niki is a dog that looks like a wolf. Plus, Niki sees things. Niki knows things.  And before the night is over, Eddie will learn that outward appearances can be deceiving...

The next story returns readers to the station of DC-34, where a young woman sits, remembering the land of wonder she once visited (gee, any idea who she might be?).  "No Longer" is told completely in rhyme, and therein, the young woman finds her cherished wonderland has been turned into a nightmarish wasteland, with old friends dead, and those who aren't have become dark and deadly.  But just when she thinks her time is up, just when she thinks she's reached the end, her eyes flutter open and she sits up in bed.  It was only a dream. Only a dream.  But it wasn't a dream.  Remember, this is Dusk County, and in Dusk County, a dream is actually nothing more than ... a nightmare ...

The horror story that rounds out this issue is "The Toy Box," and quite frankly, this is possibly the darkest of them all, and that's no lie!  A father stops by a toy story to pick up something for his newborn son.  This toy shop is very special, as the owner practically raised the man when his parents left.  But the owner has recently died, and his son now runs the shop, carrying on his father's tradition. So, would he like to buy one of his latest creations?  He can make stringed puppets just as well as his father could - some would say even better! After all, they are so life-like.  So realistic.  So, do you want one?  Do you?  C'mon, don't leave me hanging...

The stories are getting darker, bloodier, and scarier - which means to say, they are getting better and better! Dusk County is not a place I would want to visit for real, that's for sure, but I definitely will be back for another visit when The Dusk County Chronicles issue 3 comes around!  After all, this is the kind of horror anthology title that is missing from comics today!

RATING:  10 burning mushrooms out of 10 for terrifying tales that will satisfy the most rabid horror fan!