I have to give Simon & Schuster credit - they are trying.  While the Nancy Drew, Girl Detective series was what appeared to be a trial-and-error series (constantly trying different things within the series to see what works - first person, clip art covers, trilogies, model covers, forgetful Nancy, recurring characters, etc.), the current Nancy Drew Diaries series seems to have taken the best elements from the NDGD series and started working towards rebuilding Nancy Drew into the inspiring girl detective that she once was.  The stories have been better written (for the most part - as with any series, there are some not-so-good ones), and gradually, the books have become longer and longer, allowing the stories and characters to be more fleshed out.  The titles have been very reminiscent of the original Nancy Drew series, the covers provide painted (albeit digitally) scenes with Nancy, and the mysteries have begun to move away from the "sabotage" trope that seemed to be the plot of every single mystery Nancy has been solving for the past decade.  This latest Nancy Drew Diaries book, while having a couple of things I didn't care for (we'll get to that later...), is definitely one of the better ones in the series, that's for sure!

The Vanishing Statue (gotta love the title!) centers around the art world, which is rather interesting, since the previous book (Hidden Pictures) also featured a mystery involving art (photography instead of paintings and statuary). This time, Nancy and her friends find themselves, along with the rest of River Heights, invited to the mysterious mansion of the reclusive Duchess Strickland.  The Duchess, as she calls herself, has not been seen since her husband died some years ago, and no one has been to her great house since. It is said that the mansion showcased some priceless art, so everyone is excited about the opportunity to finally see it.  This grand showing coincides with River Heights' first annual Art Week and the grand opening of the new avant garde Slay Gallery, which is set to feature some new, up-and-coming artists - among them, the very unusual Sven Svenstein, a teacher's assistant in whom Bess has become enamored and is set to help him with one of his performances.  Only, things don't go exactly as planned. Of course, when do they ever, when Nancy Drew is around? 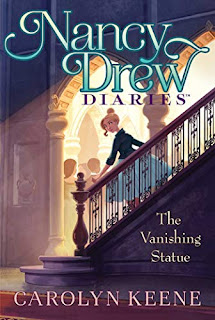 First, a statue of the goddess Diana is stolen from the Slay Gallery right in the middle of a performance by Duchess Strickland's granddaughter.  Was it one of the performers trying to bring attention to their performance art? Or was it Sven Svenstein, determined to do anything to ensure his performance art gets top billing? Or is there an art thief in River Heights, which would mean the Duchess' big party could be the thief's next target? Nancy smells a bigger mystery here, and she's going to do whatever it takes to solve the case.  The party turns out to be a truly grand event, with not only the residents of River Heights in attendance, but artists and critics from surrounding cities putting in an appearance as well.  Everything seems to be going as planned until Nancy spies one of the performance artists sneaking away into a restricted area of the house. She, of course, follows and is shocked to see the girl destroy a pedestal where the Diana statue previously stood! Then, just as the Duchess is prepared to make her big welcoming speech, the lights go out - and when they come back on, the Duchess is gone and Sven has taken center stage with a strange performance.  There is definitely more here than meets the eye, and Nancy follows a hunch to discover a secret passage and an even bigger Strickland family secret!

Several things I really liked about this book. The author makes reference to two of the previous mysteries - Hidden Pictures and The Clue at Black Creek Farm - and even brings in characters from those mysteries, who make their appearance at the Strickland party. Not only does this create a sense of continuity for the stories (with recurring characters), but it also hearkens back to the days of old, when each Nancy Drew mystery would make reference to the previous book.  It gave me a great sense of nostalgia as I read the story and brought a smile to my face.  The author also gives Hannah a bit of a bigger part in this story, and Nancy (and the reader!) learns a little bit about Hannah's past, which is something that has pretty much remained a mystery all of these years. Sadly, Ned does not play a large role in the book, but what is interesting about him in this story is that he appears to be doing work for Carson Drew - helping Nancy's father research for a big upcoming trial. This made me think of the Ned from the 1970s television show, who also did work for Carson Drew, leaving me to wonder if perhaps the author had seen the show and incorporated that tidbit into his/her story here. Finally, something else I noticed - and I don't know if this was intentional or just pure coincidence - in the first part of the book, there are sentences that conveniently use phrases that happen to be titles to old Nancy Drew books (from the NDGD era) - one instance is where Nancy talks about something disappearance "without a trace" (the title of the first Nancy Drew, Girl Detective book), and another is where Nancy talks about one of the artists having "stage fright" (the title of one of the Super Mysteries during the Girl Detective era; also the title of a Nancy Drew Files book). Maybe it was coincidence, but I like to think that perhaps the ghostwriter here was just trying to throw in a few small Easter eggs for long-time fans of Nancy Drew.

Now, a couple of things that I found surprising, unexpected, and, well, rather unnecessary for the book and for Nancy Drew, in general. I'm sure others may disagree with me on this, but since this is a book for 8 to 12 year olds, I don't necessarily think these things are necessary to the story.  First, I was surprised when I read the following paragraph when Nancy arrived at the Strickland house for the event:

I saw a few familiar faces mixed in among the artier guests. There was Maria the librarian in a smart three-piece suit, the director of the fine arts museum, Eric Hovnanian, with his husband, Carl, in matching plum smoking jackets, Joe Archer from the new arts complex, and even my old high school art teacher, Mr. Covarrubias, with his silver hair tied back in a neat ponytail and his paint-stained fingers scrubbed clean.


There was no big fuss made about it, and no further reference in the book, so I don't think it was any overt attempt to push an agenda; however, this passing reference to a gay couple in a Nancy Drew book did take me by surprise. I can't recall any Nancy Drew book (that I've ever read) having a gay character in it, or one in which a gay couple is specifically stated. I suppose this is a sign of the times we live in. However, this is actually of little consequence when compared to the way the author portrays George in this book.

Let's face it - for many years, people have made comments about George's tomboyish nature, her short hair, her boyish name. People have tried to fit George into some kind of lesbian-mold based upon her characteristics (even though I have known a number of girls / women throughout my life who were tomboys, yet were very straight), and in recent comic book stories, she has been portrayed as being a lesbian. Well, this author, while never coming right out and saying it, definitely portrays George in that manner. Her appearance, her attitude, and her ultimate dressing up in a tux and going as Nancy's date to the Strickland gala leaves little doubt in the reader's mind as to George's sexual orientation. I am not going to go into a lot of detail here (would take up quite a bit of space), but when you read the book, you can judge for yourself as to the direction this author is taking George.

All of that aside, one final thing I do want to mention, and that is the cover for this book. I absolutely love it! Nancy's hair, her outfit, the moody shadows, and - surprise, surprise! - the fact that there are other people on the cover! Up until this point, every cover in the Nancy Drew Diaries series has only featured Nancy. There have been no other people ever depicted on the covers. And while the crowd of party-goers are only the background, and there is still no Bess or George (I REALLY want to see them on a cover or two!!!!), it is nice to know that Nancy's cover world does actually have other people in it.  Don't know if this is a directive from S&S, or if artist Erin McGuire simply chooses to keep the covers focused solely on Nancy, but I do miss seeing Bess and George helping their friend on the covers for the Nancy Drew mysteries.

Overall, this is definitely one of the better mysteries, and I hope S&S keeps the series going in this direction.

RATING:  8 suits of multicolored faux fur out of 10 for moving this series in the right direction with longer stories, more fleshed out characters, and more classic mysteries!
Posted by TL at 3:57 PM