Recently, David took me to a little comic shop over in Daytona Beach, one I didn't even know existed, let alone had ever visited.  The store had tons of great and obscure back issues, a lot of toys, and a number of shelves filled with sci-fi and comic-related books.  One of those books was a paperback titled The Comic Book Killer by Richard A. Lupoff.  It was a first printing, and it was only $1, so I picked it up (as I have a small, but growing, collection of mystery books that center around comics in some way).

The book was published back in 1989 by Bantam Books, and it ran a good 260-plus pages of story with very small front, so I figured I was guaranteed a good, meaty story.  Comics - - Murder Mystery - - Crime Noir - - it had to be a gimme!  So, I put this on the top of my stack, and when I was ready to read my next book, down it came.

First, let me say that with most authors, it is pretty easy to distinguish the author's feelings and point-of-view and the characters' feelings and point-of-view.  In fact, it's not very often where I read a book and feel like I'm reading the author's own opinions.  Yet, for some reason, from the very first chapter, I got a distinct distaste in my mouth and had a very hard time shaking it.

The author, Richard A. Lupoff, clearly knows comics. Just reading the book, without doing any research on Lupoff, it is clear he is well-educated on the history of comics.  From his references to the early Timely Comics, prior to Marvel, as well as the fact that "DC" stands for Detective Comics, along with the fact that each comic has its own tell-tale signs that differentiates it from every other issue of that same comic, the book is filled with historical comic facts.  But, as his bio page at the end of the book reveals, he was involved with two pioneering studies of comics in American life - All in Color for a Dime (1971) and The Comic-Book Book (1973).  This would lead you to believe Lupoff would have a reverence for comics and the fans who read and love them. 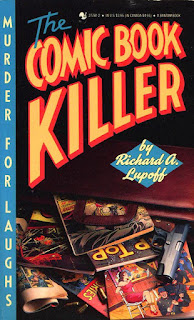 Sadly, nothing could be further from the truth.

Lupoff portrays every comic reading fanboy (and girl) in the book as skinny or fat, a slob or a hippy, not-so-intelligent or psychotic.  As if to stress the point of how belittled comic fans are, when his protagonist, Hobart Lindsey, visits a store that is 1/2 comic store and 1/2 mystery book store, he describes it as such:

The store was busy.  Two or three clerks were helping customers while a cash register kept up a steady electronic din.  The customers were easy to tell apart--the comic book buyers were young, mostly scruffy, dressed in tee-shirts and jeans or old army fatigues.  The mystery fans tended to be older, better dressed, more conservative. (p. 55)

It is this image that Lupoff portrays throughout the entirety of the book.  Now, I realize that the stereotype for "funny book" fans has not always been pretty, but let's be realistic.  By 1989 (when this book was published), comics were a more respected medium of entertainment, and it's readers and collectors were not just children, scruffy teenagers, and under/over-weight single nerds who lived in the basement of their mother's home.  I had a very difficult time not getting offended with every reference Lupoff makes in this style.

In addition, Lupoff, although to a lesser degree, makes a very clear prejudice against non-white races in this story.  Now, I realize that this was meant to come across as the main character's personal bias (which he eventually overcomes when he falls for the African-American police officer who is investigating the crime of the stolen comics and the murdered store owner), but with Lupoff's style of writing, it is sometime difficult (at least for me) to really discern if it is truly means just for the character, or if the author himself was not somewhat prejudiced.

Honestly, I was well over half-way through reading the book before I was able to truly overlook all of that and just enjoy the meat of the story.  Thirty-five comics, worth collectively a quarter of a million dollars, are stolen from a small shop outside of San Francisco.  Lindsey, who is an adjuster for the insurance company that insured the books, must investigate the claim to determine if it is valid.  At first, he writes it off as an over-inflated pricing of funny books.  As he delves more into the world of comics, something he never really got into (even though his own now-deceased father was a comic artist), he finds there is a lot more to these funny books than he realized.  These books are now being used for investments, as well as educational studies in schools of higher learning.  When the store owner is found murdered, Lindsey begins to think there is something more going on than a simple theft, particularly when the comics begin to re-appear, one by one.  Lindsey himself is attacked, and the race is on to uncover the truth about the stolen comics - and about his own father's death - a race that could cost him his own life!

The solution to the mystery is actually quite satisfying.  In some ways the plot reminded me of the old Nancy Drew and Hardy Boys mysteries, where there were two separate stories going on within the mystery, but somehow they always managed to tie together before the end, and that is definitely what occurs here.

If one can overlook the belittling of comic fans and the racial prejudices within the story, it's actually a pretty good comic-book murder-mystery.

And what I most certainly did not realize when I bought the book is that this is actually the first in an ongoing series of Lindsey/Plum detective stories, where each book apparently focuses on a different type of collecting (such as classic cars, etc.).  Will I go out and search for any of the books in this series?  Probably not.  But, I did get some enjoyment from this mystery, so I guess it was a $1 well spent.

RATING:  6 golden age heroes out of 10 for making the mystery interesting and intriguing enough to get me past the other issues.