The Wollstonecraft Detective Agency, No. 1 - The Case of the Missing Moonstone

"This is a made-up story about two very real girls: Ada Byron, who has been called the world's first computer programmer, and Mary Shelley, the world's first science-fiction author.  Ada and Mary didn't really know one another, nor did they have a detective agency together.  Mary and Ada were eighteen years apart in age, not three, as they are in the world of Wollstonecraft.  Setting that aside, the characters themselves are as true to history as we are able to tell. At the end of the book, there are notes that reveal more about what happened to each of them in real life, so that you can enjoy the history as much as I hope you'll enjoy the story.  Because the history bit is brilliant."  Stratford, p. 1. 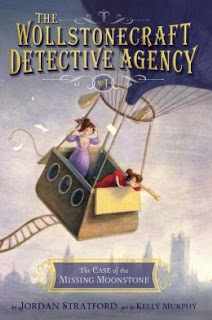 The above preface from the first book in The Wollstonecraft Detective Agency gives a better description than I ever could about these two very unique and very enjoyable-to-read characters.  Jordan Stratford has taken the daughter of the famed poet and the sci-fi author of the 19th century and breathed new life into them, not only turning them into friends from different classes in society, but into detectives of the finest caliber.  Ada and Mary have very distinct, very different, personalities, but both of them are fun and lively and without a doubt, they capture the reader's attention immediately.

The Case of the Missing Moonstone provides readers with a sufficient background on both girls before delving into the mystery itself.  Mary is a typical fourteen year old girl in the 19th century who romanticizes everything.  Ada is an awkward eleven year old genius who lacks social skills but has a super-keen intelligence.  When Mary comes to Ada's home to be tutored by Percy Snagsby, it seems unlikely that the two girls could become friends.  Mary, who loves learning and can discern feelings and attitudes in those around her, attempts to reach out to Ada, who not only can't remember the names of the people in her own household, but can't seem to be bothered with speaking in complete sentences, and they ultimately find a common goal when Ada begins questioning the criminal element and the constabulary's ability to stop them.   Thus are the beginnings of the Wollstonecraft Detective Agency.

With the help of the young boy, Charles, who rides in the carriage with Mary every morning (but who really isn't there, since he has no money and gets free rides in exchange for helping the driver read and write), the girls place an ad in the newspaper as to their agency.  They receive stacks upon stacks of responses, to which Ada says "no" to them all.  Until Mary reads a letter from Rebecca Verdigris.  About a stolen necklace.  An inheritance from her father.  A false confession by the maid. To which, Ada responds, "Yes." 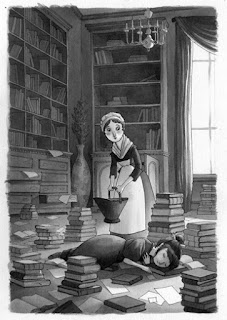 The journey from the girls' first meeting with Rebecca and her family and friends, to their visit to the prison to speak with the maid who confessed to the crime, to the ultimate showdown with the culprit behind the theft - it's a roller coaster ride of ups and downs, carriage chases and a hot air balloon chase, aliases and mistaken identities, and a secret revealed that nearly ends the girls' friendship before it begins.

At 203 pages of story and art, there is plenty of room for Stratford to flesh out his characters (even the minor ones such as Mr. Franklin, the butler who never speaks a word) and provide a well-rounded mystery that is clever and humorous.  The art, for both the cover and the interior illustrations, is by a very talented Kelly Murphy.  It varies between full page illustrations and drawings of simple objects surrounded by text, but all of the art is gorgeously rendered in pencil and very befitting of the story.

This book (and potentially the series) is a shining example of what children's books should be.  Lively, likable characters with an engaging story that is not dumbed-down or abbreviated for what some publishers deem to be the short attention spans of today's youth.  It's a shame there so few children's mystery series on the market today, and for those that are, only a few can compare to this one.  I can't wait to see what the next book holds in store!

RATING:  10 galloping horses out of 10 for taking two very real people and creating around them a fictional world of mystery for children to enjoy!