A trip to Tampa = a chance to listen to the next Dark Shadows audio story.  And this time, Quentin returns, along with Amanda Harris, in The Darkest Shadow.

This story is truly one of the better written ones.  Not only does it provide a well-plotted bridge between The Eternal Actress and The Haunted Refrain, but it delves into the history of the relationship between Quentin Collins and Amanda Harris.  The author also ensures that the events within the story are very Dark Shadows-esque, with just enough supernatural elements to remind listeners that we remain in the very Gothic world of the Collins family. 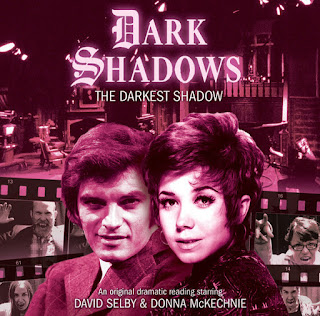 The story opens with Olivia Corey being offered a role in a new horror movie.  At first she turns it down, not liking horror films, but when she discovers the film is entitled "The Curse of Collinwood," and it tells the story of Amanda Harris and Quentin Collins, Olivia realizes she has no choice but to accept - for she is Amanda Harris.  When she arrives on set, she meets some very stereotypical Hollywood-type actors and crew, but she is unable to meet with and talk to the elusive director, D. Curtis.  She and her friend, Norman Cope (who has stood by her for many years and is secretly in love with her), realize something is very off, so they are determined to investigate and get to the bottom of the all-important question:  who knows so much about the Collins' family and particularly about Amanda Harris.

For long time fans of Dark Shadows, you may recall that Amanda Harris is a creation of Charles Delaware Tate - she is literally a painting come to life.  This aspect of her identity plays a huge part of the story, and the author takes a unique look at not just her creation, but also Tate's power to bring art to life and what would happen if life could also be forced back into art?  Elspeth Gardner makes another appearance (once again voiced by Denise Nickerson, who portrayed Amy Jennings on the TV show), as does Dorcas Hanley.  There are also brief appearances by "Andy Warhol" and "Dorian Gray," which are scenes that are sure to bring a smile to your face as you listen.

This is the first audio CD that I've seen that actually is a two-disc set.  While the original 4-part story in these audio CDs came out individually, and the second story, Kingdom of the Dead, had several CDs, since that time, each audio CD has been a single-issue CD.  This story, however, was lengthy enough to require two CDs.  That does not mean, however, that it fees long or stretched out at all.  The story progresses at a pretty good pace, and with the amount of characters involved (10 main characters, and 3 side characters), it's no wonder it took two CDS - but I can honestly say that it never dragged and it never lost my interest for one second.

It was nice learning more about Espeth Gardner, and I was a bit surprised to find out exactly where she came from.  It was also fun learning exactly how Quentin was cursed so as to end up in that gramophone needle in The Haunted Refrain.  Again, this shows the depth of planning and the expert writing at Big Finish to tie these stories together, even when they are not sequential.  These stories are keeping my appetite in check for more Dark Shadows until Lara Parker's new book comes out next month.