I had put off reading this book, as I knew it was the last book in the series and, well, quite frankly, I didn't want it to end.  I have grown to really like the characters and the writing - Vicki Lockwood has created a very engaging world of mystery and supernatural intrigue that makes me long for the days when authors actually wrote stories about characters they loved and nurtured (rather than simply churned out stories for a profit like some do today).  But, as they say, all good things must come to an end... 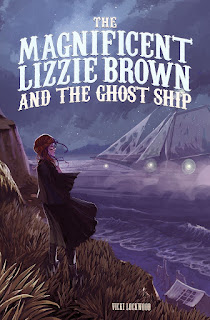 For this mystery, Lockwood takes Lizzie and her "family" of circus performers to the English seaside, where they set up a very special circus for the Maharaja Duleep Singh.  The Maharaja enjoys the circus and has paid Fitzy well to provide free entertainment to the seaside locals in hopes of endearing them to him.  The only problem is - the locals have a ghostly secret.  The townspeople are fearful of a ghost ship that appears in the harbor, for people have disappeared, never to be seen again whenever the ship appears.  Naturally, Lizzie and her friends are thrilled at the idea of another mystery to solve, but when Lizzie starts experiencing visions again, this time not just about the ghost ship, but also about her friends and about the Maharaja's lady friend, she begins to wonder whether she can trust her own sight.

The mystery itself centers around some stolen jewelry.  The groundskeeper for the estate where the circus has set up shop believes that Lizzie's friend, Hari, is responsible, as he does not trust foreigners.  Lizzie knows he is innocent, but Hari's actions begin to lead her to question her own certainty.  Then she has visions of Nora with the very necklace that was stolen from the Maharaja's lady friend!  Can she trust her own friends?  And what of that ghostly, green ship that she sees in the harbor?  Is that a harbinger of more bad things to come?

The Penny Gaff Gang (as Lizzie and her friends call themselves) set off to solve the crime.  Lockwood throws in a lot of suspense and some dangerous foibles (a rampaging elephant, a dark tunnel, a near drowning, and a climactic battle on the sea) that will definitely keep the reader's interest.  Like the other three books in this series, this is a hard one to put down - you'll want to finish it in one sitting!

SIDENOTE - this is most definitely the third book in the series - as the Maharaja and the missing ruby are the very things that Lizzie mentions in The Fairy Child,  It would be helpful if they actually numbered the books, or at the very least, provided the listing of books in the front or back, so that readers can know what order to read them in.  Nevertheless, reading them out of order did not lessen the enjoyment of the book one bit.

It's a shame Lockwood did not write any more Lizzie Brown mysteries, but I am glad she wrote the four she did - this is one series I would highly recommend to all lovers of mysteries!

RATING:  10 jet necklaces out of 10 for providing a twist ending as far as the culprit goes and strengthening the bond between Lizzie and her new "family."
Posted by TL at 3:00 PM