There can be no doubt that Jimmy Palmiotti has become one of my favorite writers over the past few years - from his work on Jonah Hex to Power Girl to Stargirl - he knows how to bring the fun back into comics, while writing interesting stories that give the reader plenty of action as well as plenty of character development.  I've been fortunate enough to meet Palmiotti over the years at various conventions and talk to him and his now-wife (and definite better-half), Amanda Conner, and they are just as down-to-earth and fun to talk with as their books are great to read.  (And Amanda has definitely come into her own as a comic writer as well, what with Harley Quinn reaching the heights it is these days.)

So, it's no surprise that I wanted to read their indy title, Super Zero. 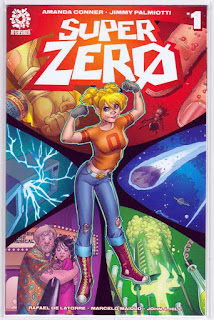 While I didn't buy the individual issues published by Aftershock Comics, I did pick up the trade while I was up in Atlanta a few months back for DragonCon.  I finally got around to reading it (yeah, spare time to read has been next to nil lately with the play I'm in), and man, what a read it was!

Just when you think you've seen about every take possible for superheroes, even the so-called "real world" superheroes - Amanda and Jimmy come along and put a whole new spin on things.  Super Zero tells the story of Dru Dragowski, a Tampa teenager (yay!  a story set in my own back yard!) who loves comics and believes that superheroes could be real under the right circumstances.  And she's bound and determined to prove it so!

Plan A:  pay a homeless man to rob her parents (not kill them, though) to create a set of circumstances that will spur her into a dark vengeance...

Plan B:  get bit by a radioactive spider (of course, her friend is afraid of spiders, so it ends up being fire ants who, even under an x-ray machine, only provide her with itchy bites all over her body)...

Plan C:  summon a demon to whom she can sell her soul in exchange for powers (although her dog has other plans for one of those candles)...

Plan D:  sneak aboard a space shuttle and get bombarded by gamma rays that will endow her with unbelievable power (yeah, like that's even possible)...

So, you ask yourself, which of the foregoing does she manage to accomplish?  Surprisingly enough, ALL of them!  But then, you ask, which of them actually gives her powers?  Well, this is a comic realm, and even though it is supposed to be a real-world setting, surely something has to give.  Surely, the superpowers can't only be in her imagination?  I mean, what if those people in the space shuttle heading up the space station were actually aliens who were planning to bring back an invasion of the planet?  Who would stop them?  Certainly not a teenage stowaway with a gazillion itching ant bites, right?

Well, Conner and Palmiotti take readers on a riotous romp through Dru's live, her family, her friends, and even her newfound mentor in the form of the homeless ex-military man who does provide her with a bit of training.  They slide in some inside jokes about the comic industry, as well as about comic books themselves, and they give readers a HUGE payoff at the end that not only makes the book so worth reading, but it also leaves you wanting for more - a lot more!

Super Zero is what comics are about - and what comics should be.  No agenda, no preaching, no dark-moody-brooding-self-doubting heroes that are never happy.  No two and three-panel pages with a splash page every few pages that keeps the story to a minimum and the art the focus (not that the art here is bad - in fact, it's beautifully rendered by Rafael De Latorre).  There is plenty of story for the buck here, and when you do get a splash page - it's because there is something important to tell at that moment!

This definitely needs to be an ongoing - I can see that there are plenty more stories of Dru and her friends, and I, for one, want to read them!  (And let's face it, you can't have a Volume 1 without a Volume 2!)

RATING:  10 affirmation hugs out of 10 for fantastically fun comic-reading enjoyment the way it's meant to be!
Posted by TL at 3:39 PM