I honestly wasn't sure if I was going to continue this series or not.  Debated for a long time on whether to even try reading this series, and after the first book (which was cute, by the way), I was still on the fence.  I finally told myself to just pick up the second book and read it and make a decision one way or another. 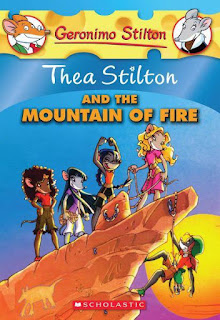 Thea Stilton and the Mountain of Fire gave me the reason I needed to continue reading the series (although, admittedly, it will never be on the top of my list).  First, although this may be for young readers, it is still a mystery series.  Yes, it may have some focus on the friendship of the five "Thea Sisters," but at its core, it's still a series of mysteries.  Second, they are fun.  There is nothing overly serious, no deep meanings, and nothing dark and brooding about the books.  In other words, they are a real escape from the darkness that exists in our real world today.

The story involves the five mouselings heading off to Australia to help Nicky's family, as all of their sheep are becoming ill for no apparent reason, and if they don't cure them soon, their entire ranch could crumble.  So Nicky and her friends head off to the land down under to see if they can help solve this mystery.  Nicky's grandmother gives her a special necklace with a pendant that she discovers holds a key to solving the mystery.  Along the way, they are thwarted time and again by Mortimer MacCardigan, who is the nasty neighbor of Nicky's family and who is determined to see her family's ranch go under.  The girls must  seek out the elders, who they are told might hold the answer to curing the sheep's sickness.  After a number of misadventures, they finally find the mountain within the mountain and learn the secret that will help save Nicky's family's ranch.

But, even more than that, The Mountain of Fire was actually educational in a engaging, fun way.  Throughout the story, there are fun facts scattered here and there about Australia and its region, it's animal life, and its people and their ways of life.  While the characters are definitely fictional (I mean, let's face it, in a world where everyone is a mouse, it's gotta be fictional, right?), not all of the locations are made up.  There are quite a number of accurate facts about Australia, and it's nice to see geography, history, and culture taught in such an easy to grasp and natural way.  I'd almost venture to say that this book might even be useful in the classroom for getting kids to learn about other countries in a way that they won't necessarily even realize they are learning!  (Of course, all reading involves learning in some form or fashion.)

What is a bit odd about this book is the fact that although the title is Thea Stilton and the Mountain of Fire, Thea herself is barely in it - she is more or less the bookends, starting the tale and finishing it, but not really involved in it at all.  Actually increases my curiosity as to whether she will be featured in any of the future books, or if she will merely be the opening narrator, allowing the series to mainly focus on the five Thea Sisters.  I suppose there's only one way to find that out...

RATING:  7 moldy brie balls out of 10 for piquing my interest just enough to make me want to read more books in the series.
Posted by TL at 6:07 PM