Finding a book, or a series of books, that you enjoy so much that you can't put them down is a bittersweet, two-edged sword.  On the one hand, you love it so much you can't wait to read it.  On the other hand, once you've read it, you know it's over or you have to wait who knows how long for the next book in the series!  Such a quandary - - read it, knowing how good it is but also that once done, you'll have to part with your literary friends; or put off reading it, building the anticipation for getting together with those characters you love so much.

The second book in the Bay Island Psychic Mystery series is just such a book.  I was pleasantly surprised at how much I loved the first mystery, with its almost grown-up Nancy Drew feel to it, and so picking up the second book to read left me with that quandary.  But I didn't wait long, because once I read that first page, I was hooked yet again. 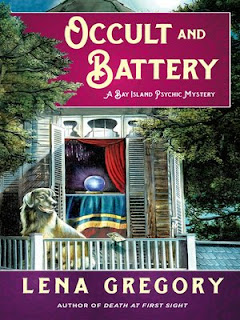 Occult and Battery finds former psychatrist Cass Donovan looking for a way to earn money to keep her shop open over the winter months (since Bay Island is not exactly a tourist destination with all the cold, ice, and snow), and she may have found it with the opportunity to do a "psychic weekend" at an abandoned mansion (supposedly haunted) being re-opened as a bed and breakfast resort.  With plans for a group reading, individuals readings, and even a seance, Cass and her friends are excited about the opportunity - - well, Cass and Stephanie are excited.  Bee, as usual, is a bit reluctant to go anywhere near a place that might have actual ghosts, even though he doesn't believe is such nonsense.  At least, so he says...

This is a murder mystery, so needless to say a body turns up.  A vicious winter snow storm traps all of the attendees in the old Madison Estate, and soon enough, the body of Conrad Wellington is found hanging from the rafters.  But is it suicide, or was it really murder?  The question is first and foremost in everyone's mind, and Cass's gut reaction tells her it was murder.  But why?  Conrad was certainly not the most pleasant of people, but was it simple greed that provided the motive, or something more sinister?  And how to Cass's ex-husband and ex-best friend (with whom she caught her husband, which precipitated the divorce) figure into things?  When Cass catches her ex-husband in the deceased's room, wiping down everything, her suspicions go into overdrive.

Then Cass crashes her car into a snowdrift outside the mansion, and she finds herself alone in the mansion with Conrad's younger brother, Jim.  And that's when she discovers the second body, that of Conrad's money-hungry, nasty witch of a wife, Joan.  But how can she tell the police without them asking why she was snooping around in the house again, after she was specifically told to stay out of it?

Author Lena Gragory provides plenty of motives, plenty of suspects, and plenty of red herrings in this well-written, engaging, and sometimes laugh-out-loud mystery.  There's a haunted house, long-lost relatives, a missing deed, even a death threat or two!  Plus, there's a determine amateur detective with her two faithful sidekicks - the loyal encourager and helper, and the sometimes timid but surprisingly capable when need be flamboyant one!  Sound a bit like Nancy Drew?  Well, the fact that the book is devoid of any swearing, the romance is kept clean, and the amateur detective doesn't even pick up a gun - I'd say this book definitely has an old-time Nancy Drew feel to it, which only adds to its charm.

Take all of this, and add in an oversized, lovable, not-so-obedient dog, and you've got a great book that any mystery-lover will absolutely enjoy!  Now comes the hard part of waiting to read the third book and hoping a fourth is in the works...

RATING:  10 dog-eaten engagement rings out of 10 for keeping me guessing right up to the very end on this one!
Posted by TL at 6:17 PM