The Unbeatable Squirrel Girl returns for a second novel, once again written by Shannon Hale and Dean Hale.  It is unbelievable how popular this character has become over the past few years, having suddenly obtained a surge in popularity, so much so that not only does she have her own ongoing comic book series, but also, apparently, this young adult book series.  I'll admit, I jumped on the bandwagon, having fallen in love with this character while she was a member of the GLA (that would be the Great Lakes Avengers), and have been enjoying her stories every since.  She is fun, and she makes reading comics (and books!) fun again.

That being said, I have to say that 2 Fuzzy, 2 Furious was not quite as good as the first book.  I can't quite put my finger on it, but it felt somewhat slow, somewhat padded, and, well, to be honest, the story probably could have been told better if it were about 75 or so pages shorter. I think it's the same problem I have with many comic books today - they are padded to tell 6-issue story arcs (to fit the trade paperback format), when really, many of the stories could be told in just 2 or 3 issues.  That is what it felt like as I was reading the book.  There seemed to be a lot of repetition and more "pre-teen drama" than necessary. 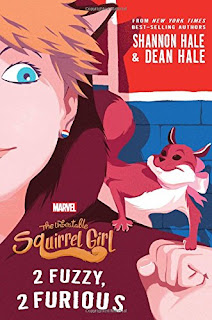 The story centers around a new mall being built between Shady Oaks and its sister town, Listless Pines.  There is something not quite right about it.  Squirrel Girl's BHFF (best human friend forever), Ana Sofia suspects there is Hydra involvement, but no one believes her.  Not even Squirrel Girl.  But then again, Squirrel Girl has other problems she is dealing with in her personal life - her teacher at school hates her, she's finding it difficult to balance life as a middle-schooler with life as a super-hero wannabe, and to top it all off, she's having difficulty maintaining her friendship with Ana Sofia, who she seems to be unintentionally offending at every turn.

The first three quarters of the book seems to be build up, with a lot of what I call "fluff" to pad out the story - Squirrel Girl/Doreen's constant self-doubt regarding her friendship, and Ana's doubt about whether Doreen/Squirrel Girl is really her friend or like everyone else she has known, etc. etc.  And, yes, this is a young adult book, and perhaps my perspective as an adult male skews my view on it, but the first book was no so heavy-laden with this type of material.  It was more about Doreen coming into her heroic side and finding that friendship with Ana Sofia.

However, there were elements of the main story interspersed throughout, with the ever-energetic Bryan (you can call him "Bry"), who works overtime to build up excitement about the new mall, going so far as to offer a contest to the neighboring cities to see what the mascot will be - a dog or a cat?  What starts out as a friendly challenge, though, ultimately becomes a brutal battle, particularly when Dog-Lord shows up in Shady Oaks with his robot puppies and Miss Meow shows up in Listless Pines with her deadly claws.  When Doreen's faithful furry friend, Tippy Toe, discovers a basement in the mall that shouldn't be there, and Ana Sofia discovers some disturbing plans on the dark net, Doreen - or rather, Squirrel Girl - realizes that some action needs to be taken to protect the good people of Shady Oaks and Listless Pines!

The Hales once again tell the story through multiple eyes (so to speak) - through the POV of Doreen, Squirrel Girl, Ana Sofia, Tippy-Toe, Text Conversations, and at one point, through the eyes of the villain himself!  And while I am normally not a fan of books where the POV changes with each chapter, it doesn't really bother me so much with Squirrel Girl - perhaps because this is more of a light-hearted adventure than it is a serious story.  Plus, the footnotes (relaying Squirrel Girl's observations of the story and the characters in it) are pretty humorous at times.

The book wasn't a complete loss, but it's definitely one I would recommend picking up in paperback and not spending the money for the hardback edition.

RATING:  6 basement barnyards out of 10 for remaining mostly true to the good-hearted, fun-loving nature of Marvel's surprise breakout character!
Posted by TL at 4:45 PM