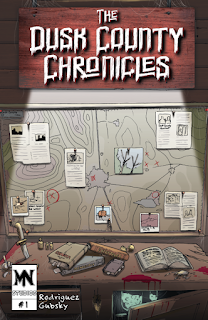 I was fortunate enough to receive an advance reviewer copy of this first issue - the kickstarter for which will begin running on March 1st and continue through March 31st.  I have no doubt that the creators will raise more than enough money to publish this first issue, and with any luck, enough to get working on the second issue!  This first foray into the world of Dusk County does way more than wet your appetite - it draws you into the dark world of twisted fairy tales and childhood nightmares.

Toy Story. Peter Pan. Superheroes. Goldilocks. Everyone is familiar with these stories in one fashion or another. Toys that come to life to aid their little boy owner. A young boy who never grows old and flies. Superpowered men and women who protect the world. A young girl who stumbles across a house in the woods and helps herself to what's inside. For those of us outside of Dusk County, these are light-hearted stories filled with hope that bring smiles to our faces. Inside Dusk County, however, it's a completely different story...

"A Friend in Me" was featured in the ashcan preview copy that I received a couple of months ago. The characters from Toy Story are reimagined in this tale of toys left alone in a car on the desert highway. But what happens when one of those toys, the spaceman, suddenly turns on his friends and begins to attack them. In the confines of a closed up car, there is nowhere to run. Nowhere to hide. And in a sealed car, with the windows rolled up ... no one can hear you scream. (Hint! Hint!)

"Forever Young,' also featured in the preview ashcan comic, gives readers a different take on the story of Peter Pan. A young girl misses her brother. So, when he suddenly appears with the ability to fly, promising they can be young and have fun forever, how can she say no? There's only one thing she has to do first - will her desire to be with her brother and stay young and carefree forever light a fire that can't be put out? As with all of the other stories in this comic, not everything is as it seems, and Jenny soon finds that out!

"Mindgames" is the first of two new stories not previously previewed. Entering the world of superheroes, where the Commander has just saved the day, stopping the villainous Medusa from yet another crime spree. But where is her partner in crime? And who violently attacks the police force escorting the criminal to prison, killing them all and taking off with Medusa? And just what is Commander hiding from his family down in the basement of his house? The answer will blow your mind - literally!  (And make sure to read the headlines running long the bottom of the TV screen in this story...)

"Just Right" reveals what really happened to Goldilocks when she helped herself to the porridge, chair, and bed of those three bears. Only - - what it if weren't bears? What if they were rabid werewolves instead? And what if another young girl stumbled upon the cottage, looking for help after Goldilocks? And what if she saw what they did to poor Goldilocks? In true horror flick fashion, it's a chase through the woods and an unexpected twist at the end that will leave the reader wanting to know - -

Writer Joel Rodriguez clearly enjoys messing with these childhood favorites. While the names have been changed to protect the innocent (and to perhaps protect Rodriguez from copyright and trademark infringement!), the stories behind these stories are obviously clear. And the frightening manner in which he portrays them can be at moments humorous ("A Friend in Me"), sad ("Forever Young"), satisfying ("Mindgames"), and quite frankly downright horrifying ("Just Right"). While every story in Dusk County may fall under the horror umbrella, each one has its own distinct tone that sets them apart and makes them unique.  The art by Roman Gubsky is rough around the edges and while maybe not as refined as George Perez, Jerry Ordway, Phil Jimenez, or some of the other mainstream comic artists, his edginess works perfectly with the dark nature of these tales. The coloring for each story is distinctly different as well, which takes the reader on a roller coaster of emotions and fear as you read panel to panel, page to page, story to story.

Overall, the comic was a great reading experience - I, for one, will be contributing to the kickstarter campaign next month, and I look forward to more Dusk County takes in the future!

RATING:  10 channel DC-34 newscasters out of 10 for a frighteningly good comic that was well worth the read!
Posted by TL at 1:20 PM