Okay, I'm gonna have to face it - I'm addicted to Dark Shadows. There are no ifs, ands, or buts about it.  After having gone several weeks now without listening to one of my Dark Shadows audio cds, I just had to pull out the next one on the stack and plug it into the CD player as I was driving into work today. And wow, what a doozie this one was!

Beyond the Grave finally pays off all those hints that have been played in the prior audios about Tom Lacey and his show, "Beyond the Grave."  There were so many connections to other CDs in this story that I admit, I got all giddy inside just listening to it! 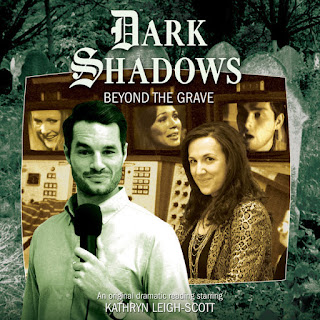 "Beyond the Grave" is a British television show that seeks out the ghost stories and supernatural occurrences and proves them real or fake (sort of a 1970s version of today's "Ghost Finders"). This time, Tom Lacey is the correspondent who heads to Collinsport, Maine to follow up on the legend of Mad Jack, who died in Eagle Hill Cemetery with his wife and daughters back at the turn of the century.  Since that time, strange sounds and smells have come from the cemetery, and at one point, a Collinsport man was said to be possessed by the spirit of Mad Jack.  Kate Ripperton, the host of the show, remains back in the studio in London, giving commentary and taking calls regarding the investigation.

Throughout the story, we get "interviews" with Carolyn Stoddard, Maggie Evans, Jonah Rooney, and even Emma Finney and Alfie Chapman (from Behind the Veil).  In addition, Eve gives Tom a warning to get out of Collinsport before the dead get him!

The story follows a sort of Blair Witch Project format - following a reporter and his cameraman through the lens of the camera and the microphone as they make their way into Eagle Hill Cemetery to uncover the truth.  But the truth is never quite what they expected, for they don't seem to know the real history of Collinsport.  Needless to say, a not-so-benevolent spirit is set loose, people are possessed, and death is everywhere - including the {SPOILER ALERT} unexpected and sad death of the new sheriff, Jim Hardy.  I had grown to really like this character, so it was extremely disappointing when he killed himself to save Maggie (and just after he finally admitted he had feelings for her).   Of course, I should have known that would be coming sooner or later, since his deputy, Haggerty, was the sheriff in the Kingdom of the Dead story (which I listened to some time ago and had forgotten).

Something creepy about the whole Blair Witch Project format of this story is that there was no real intro, no opening credit music, no end credit music, and no preview of the next story.  Instead, we get the opening of the show, we get the full length of the show, with all the questions, scares, interruptions, and even a quick commercial (such fun realism!) - and it ends with an abrupt loss of connection.  This definitely ups the creep factor to whole story!

I am still amazed with each story I listen to how consistent the stories are, and how smoothly they transition one into another.  The fact that this story was hinted at and set up over the course of the last four or five CDs shows the amazing talent and planning on the part of Big Finish and their writers.  Oh, how I wish the show had continued, as I would love more than anything to see these stories that I listen to brought to life by the actors on the small screen.

RATING:  10 horrific nursery rhymes out of 10 for creeping the heck out of me with a great ghost story worthy of Dark Shadows history!
Posted by TL at 7:03 PM