The second volume of The Marhawa Desire picks up right where Volume 1 ended - with Professor Doug Wright and his nephew, Ricky, joining forces with senior teacher Ray and security guard Kapoor to investigate possible virus-infected victims in the underground control area of the Marhawa Academy.  And, with all of the backstory and set-up taking place in Volume 1, it's pretty much a given that this second volume begins with action and keeps it going all the way through. 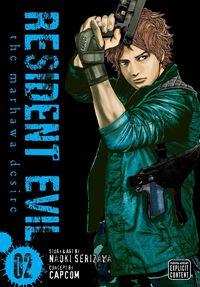 The pacing moves quickly, as the Professor and his team face off against the attacking zombies below the school - the only difference is, these zombies move fast, and shooting them in the brain doesn't stop them.  Professor Wright figures out it's a new strain of the T-virus, particularly since his nephew was bit in the first book and hasn't turned, and in this volume, Kapoor is bit and doesn't turn.  So as to avoid any spoilers, I will say that not everyone in the group makes it out of that underground center alive...

We are treated to another interlude with Chris Redfield and his team, as they begin tracking Professor Wright.  We also learn much more about Mother Gracia - why she's so intent on keeping a lid on the virus outbreak and what occurred to cause her to become so reserved and secluded.  It all seems to center around Nanan Yoshihara, a young student who died months prior.  A young student who has been seen recently on campus, wearing a dark cloak.  A young student who, quite potentially, is the one who released this new virus upon the school.

The art is once again stunning.  It is not your typical manga art (at least, not what I'm used to seeing in manga) - the action scenes literally seem to move, the expressions on the characters are realistic, and the violent scenes are vivid and bloody (despite the black and white art).  It's everything a Resident Evil fan could want.  And, surprisingly, I found this volume easier to read (since it reads as true manga, from right to left).  I guess the more I read them, the more used to it I become.  I do find myself, when I turn the page, wanting to read the left panel first, but I catch myself when I notice it doesn't quite connect with the last panel of the previous page.  I figure by the time I get to the last volume in this series, I just might have it down right.

Very cinematic, this series is - I'm taking my time reading it, as I know once I hit that last volume, I'm going to be so disappointed there aren't any more.

RATING:  10 sledgehammer-wielding security guards out of 10 for keeping a horror story clean (i.e., no nudity and no vulgarities that I can recall seeing while I read it)