Right from the get-go, let me say that I bought this book because it has stories with Donna Noble in them.  Of all the companions the new incarnations of the Doctor have had, Donna is by far my favorites - so, I gobble up pretty much any and all books, comics, and audio dramas that have her in them.  That's not to say I don't like some of the other companions, but let's face it - Donna was the only companion who was not in love with the Doctor and who was strong enough and had the guts to call the Doctor out and tell him like it is!

Of the 26 short stories in this collection, only three of them had Donna - "Disappearing Act," "Once Upon a Time," and "Most Beautiful Music" - all of which were written by Justin Richards.  He clearly loves Donna as much as I do, as the stories capture the essence of her character and her dynamic with the Doctor (David Tennant).  Her questioning of the Doctor, her sometimes annoying the Doctor, and her demanding to be treated as an equal to the Doctor.  Yet, at the same time, he captures her desire to help others, to jump in without thinking to see that right succeeds, and to beg the Doctor to solve the injustice that exists throughout time and space. 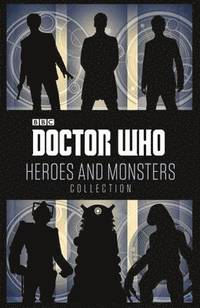 The first story sees a magician who uses (and abuses) an Ood in his stage act, allowing him to steal valuables from the audience without them even realizing it.  The second story is about a writer who gets sucked into telling an ever-changing story to feed an alien that is somehow absorbed in his computer.  The third, and final, Donna tale is about a child musician who is hundreds of years old due to an alien being trapped within his lassimater that plays the most beautiful, soul-reaching music in all of the universe.  All three are touching tales, and all three make me miss Donna all the more.

It's funny how much I've become a fan of Doctor Who - when my friend, Wayne, used to talk about Doctor Who and Sarah Jane (his favorite companion), I would just nod and say "uh-huh" without really listening.  Now, ever since Christopher Eccleston appeared in the 2005 revival of the series, I've been hooked.  And while the Doctors may change, and the companions may come and go, one thing will remain a constant - Donna Noble (and the actress who brought the role to life, the very talented Catherine Tate) will forever remain my favorite.

RATING:  8 missing donuts out of 10 for bringing back all of those companions and villains (and Doctors!) that have made this revival series what it is - fun and engaging!