A Wells & Wong Mystery, Book 2 - Poison is Not Polite

Due to DragonCon and the tech week for the play I am currently in, I regretfully fell behind in updating my blog - I didn't stop reading, I just didn't have time to post my random thoughts on the books I've read - so I'll be playing catch up over the next week or so...

After the disappointment of the first book, I can say that the second mystery in this series did head in the right direction.  Poison is Not Polite takes Daisy Wells and Hazel Wong on another adventure to solve a murder - only this time it's a bit more personal ( and written in a bit more appropriate manner for the audience at which it is aimed). 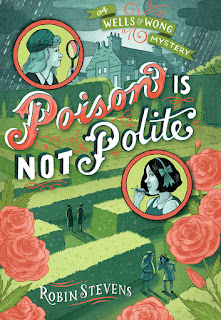 The author, Robin Stevens, returns Daisy home for the holidays, with Hazel tagging along to share in Daisy's birthday celebration. The Wells' sprawling countryside estate is well-worn, and with its countless rooms, unkept grounds, and Shining-like garden maze, it quickly becomes clear that not only is the Wells family not quite financially well-off, but things are not all what they seem to be.  The girls are introduced to Daisy's new governess, Miss Alston, who has come to tutor Daisy and Hazel over the holidays.  While she comes with the highest recommendations, little is known about her.  Then arrives Mr. Curtis, a supposed friend of Daisy's mother, who seems a bit too interested in Daisy's mother, as well as all of the antiques throughout the estate. Then, there's the arrival of Daisy's Uncle Felix and her Aunt Saskia, both of whom have their own eccentricities.  And lest we forget, Daisy and Hazel's classmates, Kitty and Beanie, show up to join the celebration, as well as Daisy's brother, Bertie, and his best friend, Stephen.

Stevens provides a rather large, well-rounded cast of characters, each with their own quirks and many of whom clearly have secrets they are doing their best to keep hidden.  As with any good murder mystery, one of the participants dies under peculiar circumstances right in the middle of Daisy's 14th birthday party, and it once again falls upon Daisy and Hazel to solve the crime.  Only the Wells and Wong Detective Agency grows a bit with this book, as their friends, Kitty and Beanie, join in (albeit rather reluctantly on the part of Beanie).  Mr. Curtis, who was pretty much despised by everyone in the house except Daisy's mother, is murdered.  Poisoned, to be exact.  Poisoned in a room full of people, with everyone watching.  Stevens provides the age old questions - who did it, why did they do it, and quite frankly, how did they do it in full view of everyone in the room?

Thankfully, the author avoid using the swear words that were so prominent in the first mystery, and other than the hinted affair of Daisy's mother with Mr. Curtis, there is no sexual subtext within the story.  Instead, Stevens provides a well-plotted murder mystery with a revolving number of suspects.  The interaction she creates between Daisy and Hazel throughout the story is like a roller coaster - particularly when Hazel forces Daisy to confront the fact that her own father may be the murderer, and later when Hazel must face the fact that she is going to have to doubt one of the people in the house that she has placed her trust in.

As with the previous book, the police inspector arrives near the end to make an arrest, and Daisy puts on a show to reveal who the true murderer is, thus once again earning the respect and thanks of the inspector that Hazel finds to be so attractive and engaging.  And as Daisy walks through the steps of the murder and all of the events that occurred thereafter, the reader is left to realize that it was all right there all along.  While it is still a bit off-kilter to have such young teenagers solving actual murders, this second book in the series definitely handled it a lot better than the first.  Hopefully, further books in this series will maintain this level of storytelling and writing, which is about the only way it's going to keep my interest.

RATING:  7 shiny silver police badges out of 10 for removing those elements that don't belong in a children's mystery series and building upon the friendship between Daisy and Hazel, taking them in the right direction.