I honestly can't remember how I fell upon this series.  Perhaps I happened across it while browsing Amazon, or maybe it was one of those "recommendations" that shows up on my Facebook page from time to time, or it could have even been a series someone mentioned to me somewhere.  Regardless of how I found out about it, I am glad I did.

What's interesting about this book (and possibly the series - won't know until I read the next books) is that although it is toted as a "Lucius Fogg novel," Mr. Fogg is not the protagonist.  Rather, Fogg's assistant, Jimmy Doyle, is the main character in the book.  Described as "an honorable man who took a bullet for his country," Doyle returns to New York City and becomes a private investigator.  Through various circumstances, he has come into the employ of the enigmatic Lucius Fogg and discovered a world beyond that which every day people like you and me see. 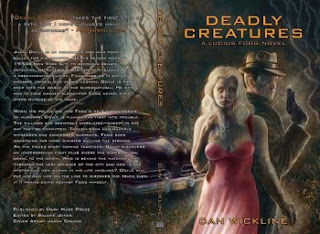 Author Dan Wickline creates an instantly likable character in Jimmy Doyle.  He is part pulp-detective, part hired-gun, and part occult-investigator.  He takes the strange goings-on around him in stride, although admits that when he first came to work for Fogg, it was all a bit overwhelming and hard to accept.  He genuinely cares for those around him, as is evidenced when he actually leaves Fogg's employ to chase justice for a client who was killed.  Lucius Fogg, on the other hand, is mysterious and reserved, and the reader only gets hints and teases as to who and "what" Fogg is.  He never leaves the house, and he only meets with clients after 9 p.m.  Is he a vampire?  A ghoul?  A cursed soul?  Wickline keeps the mystery of Fogg's identity under wraps for now - in some ways, it reminds me of the mystery surrounding Elizabeth Collins Stoddard in the opening years of Dark Shadows - she hadn't left the house in 18 years, and no one quite knew why.

This first foray into the world of Lucius Fogg, Deadly Creatures, starts with an odd mystery involving young women who are being murdered by men who have never owned a gun, never fired a shot in their life, do not know the women they are shooting, and afterwards cannot explain what they have done.  The police are stumped, and for the first time, Detective Sebastian "Sea Bass" Lee comes to Fogg and Doyle for help.  Within the first 70 pages of the book, this mystery is resolved by Fogg, revealing demonic possession created by a man who became jealous of his best friend (love interest?)'s sudden involvement with a mysterious woman.  Doyle and Detective Lee have a showdown with the man and his demon, and ultimately, they take him down.

But that's not where the story ends...

Doyle can't shake the feeling there is more to the story.  And there is.  It turns out that one of the richest men in New York, and one of the most powerful, is hosting tournament fighting, but instead of normal men, he is utilizing werewolves.  There's only one problem - all of the night creatures, including werewolves, reside within Old Town, and they are protected under a pact made many years ago. So, then, where is Ravenstorm getting his fresh meat for the fights?  When one of Doyle's clients is turned into a fighting wolf, and then killed, Doyle has to seek justice, even if it means he has to give up his job with Fogg.  The stakes are high, a woman is involved (isn't there always?), and Doyle sacrifices his humanity to mete out justice for his fallen client.

Wickline provides a fast-moving, intricate web of deceit story where everything is not always what it seems, and those who may seem villainous at first may not be as bad as one initially thinks.  There are moments where you are not quite sure whether you should like a character or hate him/her, and then Wickline surprises you by suddenly proving your thoughts on the character wrong.  A number of supporting cast members have definitely been set up in this introductory story.  I particularly liked Tiny, who was a bouncer for a particular vampire club in Old Town.  If you read the book, you'll understand why.

I know Wickline has currently published three books in this series, and I hope there are more to come.  Definitely a series I would recommend for fans of the supernatural and mystery genres!

RATING:  9 messenger crows out of 10 for opening up a whole new world of supernatural mysteries for me (and others!) to enjoy.
Posted by TL at 2:30 PM