When Gotham Academy was first announced as a new ongoing series in the Batman-world of titles, I passed on it. I've never been a fan of Batman, and I assumed this would be just another one of the countless titles to feature the overused character.  Much later, a good friend told me he read the first few issues, and that it was exceptionally good and in many ways, it could be compared to the children's mystery series that we loved and collected.  So, taking a chance, I ordered the first graphic novel collection when it came out. 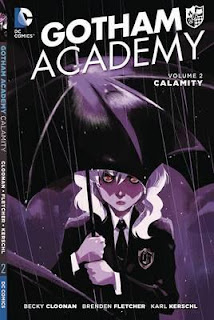 Gotham Academy is very peripherally related to the Batman titles.  The series focuses on Olive Silverlock and her friend, Maps, who, in the first graphic novel, stumbled across a lot of secrets surrounding their school and its many tunnels, hidden passages, and secret rooms.  Olive discovered that she has an uncanny connection with fire, and she may very well be responsible for some of the fires that occur at the school.  Volume 2 opens with Maps on her own - well, almost on her own, for she suddenly finds herself partnered with none other than Damian Wayne (the current Robin) literally.  It seems Maps accidentally took a cursed quill, and whatever she writes with it comes to pass.  Now that she and Damian are stuck together (thanks to her writing "Maps + Damian" in her notebook), they must search for the quill and find a way to undo the spell cast upon them.  It's a fun little done-in-one issue (which are so rare in today's comics of 6-issue storylines) that provides some lightheartedness before settling into the darker storyline that follows.

The rest of Volume 2 centers more around Olive, the loss of her mother, the discovery of her mother's past as a supervillain named Calamity, and her possible inheritance of her mother's powers and insanity.  Not only do Olive, Maps, and their friends in the Detective Club set out to discover who has turned one of their fellow students into a man-bat and why a young relative of Clayface is determined to undermine the current drama production at the school; but, they also unwittingly become involved in Olive's search for the truth about her identity and what her heritage could mean for her.  Plus, amidst all of this, Maps meets not only Damian Wayne, but she meets Red Robin and gets herself a real, honest-to-goodness batarang!

The resolution of that story leaves some unanswered questions, which I have no doubt will be explored in further storylines - but I do hope that the writers, Becky Cloonan and Brenden Fletcher, will not take her down a path of darkness and villainy - that would just be too convenient.  Cloonan and Fletcher have created a gothic mystery series here that, while on the outer edge of the bat-verse, does not rely on Batman and his army of anti-heroes to move their stories forward.  Rather, they rely on the fun, well-developed characters to capture the readers' attention.  The stories are dark in many ways, but yet they maintain some humor and lightheartedness throughout that remind readers that even the darkest stories can still be fun to read!  So, while we deal with Olive's death, we also see Maps' growing excitement as she shows off her knowledge of the school's tunnels and passages.  While we follow Tristan's search for a cure to his man-bat curse, we also have our heart-strings pulled as Kyle continues to try and win Olive's attention.

Cloonan and Fletcher have a fantastic series here, and with my luck when it comes to finding really enjoyable comic series, it will likely not last.  The third graphic novel was recently solicited, and the ongoing series has been rebooted as Gotham Academy: Second Semester, so hopefully that's a good sign that it will continue for a little while at least.  With all of the loser titles that DC has been putting out in the past five or more years, this one definitely shines as one of their best written titles.  (And, hey, the art's not bad either!)

RATING:  9 field trips to Gotham City out of 10 for successfully combining gothic tales with children's school mysteries with super-heroes and super-villains in comic format and making it so good to read!