A Change of Fortune Mystery, Book One - Whispers Beyond the Veil

Whispers Beyond the Veil introduces readers to Ruby Proulx (yeah, I have no clue how to say that last name either!), the daughter of a con artist who has picked up a lot of her father's talents for not only conning others, but in reading them and discerning cues from their non-verbal movements.  Ruby is definitely not your typical protagonist.  She is far from innocent, and in fact, the opening chapter shows just how far she has fallen when she follows through with her father's plan for a new scheme, despite that voice inside of her telling her not to do it, and she ends up killing the one man in her father's company of people who actually treats her as a real person.  It is this horrific incident that leads Ruby to seek out her aunt, her deceased mother's sister, and puts her on the path to discovering that the little voice inside of her is more than just a conscience! 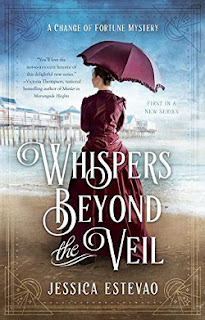 Author Jessica Estevao definitely creates a world that draws the reader in, with characters you immediately want to know more about.  When Ruby reaches Old Orchard, Maine, she and readers meet a cast of characters as different and unique as any I've ever seen.  Officer Warren Yancey is an honest police officer in a department that from all appearances has some corruption starting at the top of the chain.  Ruby's Aunt Honoria Belden (and no, she's not related to Trixie - at least, not that I'm aware of!) is a lovable, old woman who has a lot of inner strength and who cherishes family above all else.  The cook and housekeeper at her aunt's inn, Mrs. Doyle, is a stern woman who trusts little but is loyal to Honoria and will do anything for her.  Officer Yancey's sister, Lucille (Lucy), is a free-spirited and determined young woman who has learned to stand up for herself in the absence of both her father and her brother.  There's also the rather questionable police chief, the skittish young maid at the inn, Officer Yancey's widowed mother, and the numerous guests at the Hotel Belden.

Oh, yes, and in case I didn't mention - the Hotel Belden caters to a very specific clientele - those individuals who believe in and practice the various psychic crafts.

The psychic twist to this tale is what really sold me on this book (along with the title).  I love Kay Hooper's Bishop/Special Crimes Unit books, which deal with a whole federal department of psychic investigators.  So, I was looking forward to reading a new series about a psychic who solves crimes.  Unfortunately, Estevao spent more time on Ruby's other talents (namely, the con-artist aspect she learned from her father) than that inner voice that she inherited from her mother's side of the family.  I really would have liked to have seen more of that inner voice, but since this is only the first book, and Ruby is just coming to terms with the fact that the voice is real and she is not crazy, perhaps there will be more of that developing as the series continues.  I supposed that's one of those "we'll have to wait and see" kind of things.

There are definitely some ongoing threads that will be seen throughout this series.  What happened to Officer Yancey when he was away in the military?  How long will Ruby be able to keep the death of Johnny and her part in it a secret?  When will the chief of police be outed for his illegal dealings?  What really happened with Officer Yancey's father when he was in prison?  And just when will Ruby's father show up in Old Orchard (which is bound to happen sooner or later)?  So many questions give rise to so many potential stories, so I hope that this first book does well so that we'll see more in the future (no second book is listed on Amazon yet...)

Otherwise, the mystery is so well-plotted that I found myself going back and forth with my thoughts on who the murderer was, and Estevao was quite cunning herself in how she ultimately revealed it (and who got blamed, or took the blame, for the murders along the way).  A definite recommended book for mystery lovers!

RATING:  9 flickering candles out of 10 for melding a bit of reality into a whole lot of fiction to create a great little mystery with a wonderful new crime-solver!
Posted by TL at 1:52 PM