Harry Dresden, Chicago's resident Wizard, is back in an all-new story, written by creator Jim Butcher, with the assistance of Mark Powers.  The characters and story are brought to life with the wonderful art of Carlos Gomez.  Wild Card is a new tale that takes place after the last comic mini-series, Down Town, and before the novel, Small Favor.

As with any Dresden story, poor Harry gets caught up in yet another battle - only this time, nothing is exactly what it seems.  Two girls end up dead, and it appears they were killed by Marcone's forces.  The girls were of the White Court, who wants revenge.  Meanwhile, Marcone thinks the cops have taken out some of his men, so he is looking for payback.  And the Chicago PD has seen one of their own killed and another injured, and they want someone to punish for it.  It's a three-way war that is brewing, ready to do God-only-knows how much damage to the city.  And, as usual, Harry is the only one that can see through all the nonsense to know that someone is setting everyone up.  Who benefits from a total chaos war like this? 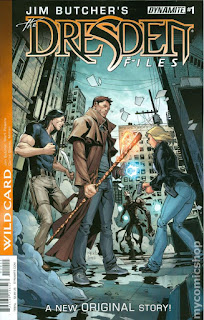 While I love seeing Dresden brought to life (I still miss the old Sci-Fi television series), I will admit that I don't necessarily like having my own visuals of these characters taken from me.  Dresden and Murphy aren't really too much off from what I had imagined in my mind; other characters...well, they are nothing like I imagined.  Butters (the coroner), for example.  The glasses are spot on, but I for some reason imagined him as a short, geeky guy with red hair (for the life of me, I can't recall if they ever give his hair color in the books).  Perhaps I've always seen him that way, as I see a lot of myself in him.  And Molly.  Well, I expected Molly to be a lot more "goth" than how she is depicted in the comics.  Then there's Leanansidhe.  Harry's faerie godmother.  She was nothing like I envisioned.  A lot more sexier, a lot more faerie-like, and a lot meaner is what I had always imagined.

Now, Harry's brother Thomas - there's not too many ways you can mess up tall, dark-haired, and sexy.  Gomez got this Adonis pretty much dead-on!

With Butcher's involvement, the characters remain consistent with the books, and the stories build on the books, filling in gaps and providing some great life-threatening, world-endangering battles that further test Harry and his friends.  This time around, we get to see how Harry fares against a demon powerful enough to do damage to his faerie godmother, someone Harry had always thought to be all-powerful and unstoppable.  But this new threat (Puck) turns out to be something entirely new - everything he does, every life he destroys, every destruction he causes - it's all out of boredom.  He simply does it for fun, for something to do.

I have to say, the manner in which Dresden comes up with to put an end to Puck's shenanigans is pretty ingenious and most definitely pure Dresden-style.  It brought a smile to my face, and I cheered inside (just like I do with pretty much every Dresden story when he wins in the end).

Now, when exactly is Butcher going to sit down and write the next Dresden novel????  His website lists the 16th book, Peace Talks, but still no word on its release.  UGH!!!!!

RATING:  10 full houses out of 10 for giving Dresden a true "wild card" of a villain, one that could be a worthy nemesis for our favorite wizard!