The Curious Cat Spy Club, Book 4 - The Secret of the Shadow Bandit

Linda Joy Singleton knows how to tell a good mystery, there can be no doubt about that.  She also knows how to stay consistent with her characters and to have them grow naturally within the stories.  With her fourth Curious Cat Spy Club Nove, Singleton also shows once again that she knows how to maintain relevancy to a current generation of young readers, while at the same time, giving nod to all of us "older" collectors and readers of yester-year. 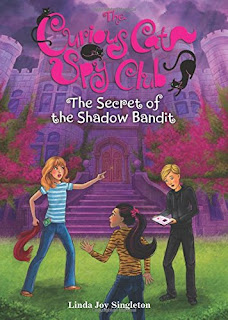 The Secret of the Shadow Bandit was a wonderful read for so many reasons.  First, the story provides a superb setting: a faux castle with turrets and grand rooms, with a "dungeon" in the basement.  The fact that Kelsey and her family live in the cottage on the grounds of the castle, and her father works as the chef for the man who owns the castle pretty much guarantees a whole host of possible stories in the future!  Second, there are several smaller mysteries that all connect in one way or another to the overall mystery of the missing chess piece - from the coded message in the tree house the kids discover, to the mysterious nature of the unfriendly butler, to the sudden disappearance of the prior inhabitants of the tree house.  Plus, why does the owner of the castle, one Mr. Bragg, the king of resorts, refuse to talk about his family and the former inhabitants of the cottage?  Third, and probably the biggest attraction for a children's series lover like me, are the fun little in-jokes, if you will, and nods to the mysteries of days gone by:

p. 31 - I sigh too, because I'd hoped to find something mysterious.  Unfortunately real life isn't as thrilling as the plots in my mystery books, where an old clock reveals a hidden will, a brassbound chest hides love letters, or a haunted attic holds dazzling jewels.  (Can you spot the Nancy Drew books in that list?)

p. 53 - We're all so different but we've become best friends, I think, smiling to myself.  (who else do we know that were always described as being "so different," yet you'd never know they were cousins?)

p. 126 - "Make a right turn on Melody Lane," Gran Nola says as she hurries to catch up.  (Lilian Garis would be so thrilled to know her books are still remembered today)

And the cover itself - anyone who remembers the early digest books from Simon & Schuster from the Nancy Drew series might see a similarity between the cover to this book and the first cover art for Nancy Drew - The Double Horror of Fenley Place.

The characterization of Kelsey, Leo, and Becca continues to strengthen in this book, and it seems Singleton is getting more and more of a feel for the three of them.  Kelsey, over the course of four books, has become less insecure and more determined.  Becca has learned that that is much more to people than their style and status.  Leo still resembles a younger version of Sheldon (c'mon, don't tell me you don't watch Big Bang Theory?!), but he does something that is very, VERY surprising in this book that has been building over the past book or so (if you noticed the signs).  And while Frankie only gets a brief mention in the book, it is nice to see the regular cast of supporting characters growing and staying in the picture.

And, last but not least, the "Bandit" from the title actually turns out to be a cute little ferret that was left behind by the previous owners of the tree house - a female ferret with a penchant for stealing items to build a nest (leading our spy club members to wonder if perhaps Bandit isn't the one who has been pilfering items from the area).  I'm amazed at how much information there is in this book about animals (such as the fact that ferrets do not survive in the wild, as they are more domesticated animals, and the fact that wild cats have their ears clipped when they are fixed, so that animal control will know they won't be reproducing), and it's great that a book written to entertain can also provide some useful knowledge.

(Just one side note - something I thought was a bit funny is on page 67, it reads "When we start back up the stars, King Bragg pauses..." Clearly, it was meant to say "stairs" and not "stars," but I guess the editor missed that one!)

All in all, another successful mystery for the Curious Cat Spy Club - Singleton can definitely count this as another win for her writing career.  Now, we just have to wait until book five comes out...

RATING:  10 global positioning finders out of 10 for expanding the CCSC's world and continuing to provide mysteries that are fun and engaging!