Can one every truly get enough of Quentin Collins?  After sharing an adventure with Olivia Corey (Amanda Harris) in audio CD 44 - "The Darkest Shadow," Quentin comes right back for the 45th audio story, "Panic."  This time around, however, he shares the tale with none other than Susan Sullivan, who David Selby fans will remember worked with Selby for a number of years on the set of the nighttime soap, Falcon Crest.  It was actually kinda cool to hear the two of them together, although their characters here are a far cry from the Falcon Crest days.

In this tale, Quentin is talking to his great-great-grandson, Tom Cunningham (who fans of the audios will remember from the Bloodlust story, setting this tale after that saga.  Quentin is remembering a time when he traveled to London in an attempt to escape all the horrors and events that have plagued him through the years in Collinsport.  While there, he settled down into a "normal" life as the owner of an antique store.  Until the day Lela Quick comes in. 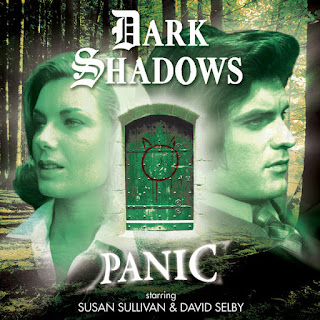 (Side note - clearly Lela Quick is clearly an homage to Lela Swift, who directed nearly half the episodes of the TV show)

The story follows Lela's fascination with a song that she can't get out of her head.  A song that one of her students tells her he overheard coming from the Pandemonium Antique shop.  The very shop that Quentin now owns, and over which Lela happens to reside.  The tune she can't seem to shake Lela finds on a record in the store.  She is prepared to make the purchase until Quentin stops her, and she leaves the shop rather perturbed.  Needless to say, she wakes to the tune that night, and discovers it is not just in her head.  Breaking into the shop, she finds the record playing - and ultimately finds herself wandering into the back of the store and into another realm entirely!  Lost in the woods, she comes face to face with Quentin Collins!

The author of this audio, Roy Gill, weaves a wonderful tale of mystery, secrets, and forgotten pasts, and he even integrates some long forgotten mythology involving the god, Pan.  There is some great references to the fact that gods of long ago can be completely unfamiliar with the technology and inventions of today, and he provides a rather ingenious means whereby Quentin helps Lela break the hold that Pan has over her.

And I'll hold off on revealing the rather surprising secret that comes to play at the end of this audio - a secret that I have no doubt will have repercussions in future stories of the Collins' family!

As I get closer to reaching the point where I am caught up with all of these audio stories, it is with mixed feelings - I'll be thrilled to have finally heard all the stories that are out there, but it will be disappointing to know that I have to wait right along with everyone else for however many months until the next ones come out!

RATING:  10 haunted phonographs out of 10 for keeping the tales of the Collins' clan fresh and exciting and just as new as they were back when the TV show first aired!