SpacePop, Volume One - Not Your Average Princesses

The Dark Empress of Evil has taken over your galaxy.  She controls all modes of communication, regulates all modes of travel, and incites separation and fighting among the once united planets.  She has kidnapped the ruling leaders and destroyed their palaces.  Who are you going to call?

Ghostbusters?  No, this isn't supernatural in nature.
Nancy Drew and the Hardy Boys?  No, there's no mystery here.

No, in this world, the citizens of the Pentangle galaxy must pin all their hopes on the five princesses who have gone into hiding ... who have decided they can't just sit back and what as Geela, the Dark Empress of Evil, destroys their home worlds.  Enter: Athena, Hera, Juno, Luna, and Rhea - the hottest new girl band in outer space - SPACEPOP! 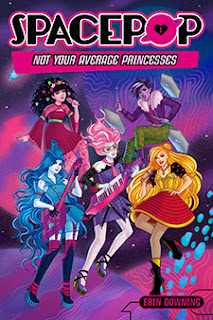 Yes, folks, I couldn't make this up even if I tried...

While I've been raving recently on how fortunate I've been in picking up new series where the introductory book to the series has been absolutely astounding, garnering my interest in future books, once in a while I'm not quite so lucky.  This would be one of those cases.

Not Your Average Princesses is a Jem and the Holograms wannabe that doesn't quite cut it.  The five princesses turned rock-stars are too cliche - the stuck-on-herself diva, the earth-loving peace maker, the rambunctious tomboy, the determined genius, and the sly schemer and planner.  Their dialogue and actions continually thrive off of these characteristics, as if these are the only things that define the five girls.  And, yes, while I realize these books are written for a young audience, marketed pretty much solely for girls, I'd like to think that the young girls would want the characters in the books they read to be a bit more three-dimensional.  And we won't even begin to talk about the girls' pets that seem to go with them wherever they go...

The underlying plot to the story isn't truly bad.  An evil empress has taken over the galaxy, and the girls decide to do what they can to spread the word of rebellion.  When they are contacted by a member of an underground resistance, they decide to join, further proving their desire to free the Pentangle from the cruel and vicious rule of Geela.  The story moves fairly quickly (not only do the girls form a band, but they begin a tour and go on three ever-increasingly dangerous missions by the end of this first book), and it's pretty straightforward and simple in the storytelling.

The one saving grace for me in this book were the comic pages within the tale.  Chapters Six, Fifteen, and Sixteen are all told in comic format, with art by Jen Bartel (who, interestingly enough, is not given credit for the art on the cover or the title page).  She actually brings the characters to life on the page in full color, and while the comic chapters are pretty short, it gave me pause to think - this would have probably been much better told as a full comic, rather than prose with only a few pages of comic.

Ah, well, I suppose you can't win them all when trying new series.  I have the second book in the series, and one day I'll get around to reading that - but I've got plenty of other books that I know will be good to read before it.

RATING:  3 lipstick and compact communicators out of 10 simply for the comic book pages within the story that kept the book from being a total fail.
Posted by TL at 4:35 PM