The series of books about DC's female super heroes continues with this third volume starring Batgirl.  Picking up at the exact point where the second book ended, Batgirl at Super Hero High tells the story of a hero without powers - a hero who uses her quick-thinking, super intelligence to outwit, out-maneuver, and out-smart her enemies.

Admittedly, the story starts off rather slowly - rather than a superhero battle or even a superhero origin tale, readers get more of a teen drama of "I'm not like all the other girls, I don't fit in, why won't my dad let me go with the other girls, etc, etc"  More than half of the book drones on this way, with only a tv show contest that Barbara (a/k/a Batgirl) wins to break the monotony.  It's not until Batgirl helps Harley Quinn create a three-dimensional HarleyGrams (instant messages that pop out of your computer in three dimensions!) that the battle comes into play.  Someone has tinkered with the HarleyGrams and turned them into HarleyWhams, bringing the messages to life so that they can not only cause damage to the individual computers, but ultimately bring down the entire internet! 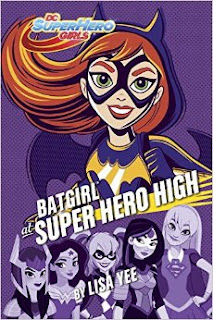 The culprit is pretty easy to figure out, and it does provide a nice set up for the introduction of a new villain to the DC Super Hero Girls universe - one easily recognizable to the Barbara Gordon fans in her Oracle/Birds of Prey days.  (And speaking of which, Yee provides a nice nod to the BOP, as the "Birds of Prey" is a music group that Barbara listens to in her down time.)  The showdown between Batgirl and her arch-nemesis is fun to read, and I could easily picture it translated to comic book format as I was reading it.  While Yee does engage in some tech-savvy dialogue and such, she does not weigh down the book with so much technical blabber so as to bore the reader.  Plus, once Batgirl begins her campaign to defeat her nemesis, that is the time when we see the REAL Barbara Gordon / Batgirl come to life.  Prior to that, she's simply another whiny teenager.

While the story focuses on Batgirl, her friendship with Supergirl is a large part of the story (which is a nice throw-back to the pre-Crisis DC days when Supergirl and Batgirl were the best of friends in the comics) and Beast Boy actually gets some pretty good page time.  Wonder Woman takes a back seat, while lesser known character Katana sees more of the light (and well she should, since the epilogue would seem to indicate that she will be the star of the next book in this series).  If this series continues, I hope they will spotlight some of the lesser known characters - would love to see books on Starfire, Amethyst, Terra, Halo, Hawkgirl, and so on.  I suppose only time will tell.

RATING:  6 baby bats out of 10 for keeping the female super hero genre alive and for melding nicely Barbara Gordon's personas as both Oracle and Batgirl.
Posted by TL at 11:47 AM