Class - from the Universe of Doctor Who: The Stone House

Class has been an unexpected surprise for me.  The television show was announced some time ago, back when Clara was the companion of Doctor Who, but it never seemed to see the light of day.  Well, apparently it aired overseas last year, but it never made it to America until just recently.  In the meanwhile, I've heard reports that BBC is not picking up the show for a second season, which is truly sad - despite how dark it can be sometimes, the show has some really good stories, some very strong characters (both likable and not-so-likable), and a fantastic underlying thread of a subplots.

Then along comes The Stone House, the first novel based on the Class television show published here in the States.

Not exactly sure where this tale fits in with the television timeline, but the author, A.K. Benedict, manages to capture the essence of these characters pretty much dead-on.  Miss Quill, Charlie, Matteusz, April, Ram, and Tanya all read exactly as they act on the show.  While the whole "present tense" thing was a bit annoying (is this the next up-and-coming thing for writers to do?  write in the present tense, rather than past? it is not something I enjoy reading, but just like the switch to first person tales, I suppose it is something I will get used to as more and more authors do it), the story itself overcame that obstacle. 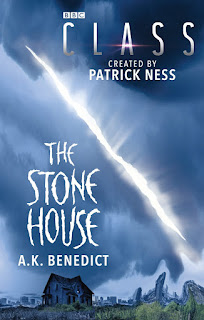 The stone house at the end of the street sits quietly.  No one has really noticed it.  Until the day Tanya finds herself walking past it.  And sees the face in the window. The face of a girl.  A girl crying out for help.  Who is she?  And why is it that Tanya feels a need - no, make that a NEED - to go back to the house?  To go into the house and help that girl.  A girl who doesn't seem to be there.

Miss Quill and her friends are somewhat skeptic of Tanya's request that they help her investigate the house.  But as with anything set in the Doctor Who universe, nothing is quite what it seems.  The house seems to bring nightmares to life.  Whether's it's Tanya's fear of never having her mother's approval, or Charlie's fear of being thrust back into the war that devastated his planet - the house seems to give those fears form and make them real.  But what's worse is what isn't seen.  Tanya knows there is a girl in that house.  Is it Alice, the former owner, who died at a ripe old age?  Is it a kidnapped young girl being held against her will?  Or is it something else?

There is plenty of mystery in this book, as well as good ol' sci-fi jumps and scares as the classmates realize that Tanya is on to something, and the danger this house represents could be a danger to the world at large - and only they can stop it.  But can they stop it before the developer who has purchased the property comes in and demolishes the old stone house?  And just what happened to Tanya...?

Benedict gives a bit of a lengthy build-up, but it's well worth the payoff in the end.  And while the overall mystery does have resolution, there is a subplot that is left unanswered, giving it some real-world feel (since, let's face it, every mystery in the real world doesn't get a clean-cut resolution, does it?).

Fans of the Class television show will enjoy this novel, and since it doesn't appear we'll be getting any more seasons from BBC, this and the next two books will have to serve to quench our thirst for more stories of these characters.

RATING:  7 white bone spiders out of 10 for expanding the Class universe, even if just a tiny bit.
Posted by TL at 3:11 PM