The Wollstonecraft Detective Agency, No. 3 - The Case of the Counterfeit Criminals

Young Ada Byron and Mary Godwin are back with another mystery to solve in Jordan Stratford's latest book in The Wollstonecraft Detective Agency mystery series!

I must say that I am impressed that Stratford is able to write some well-crafted mysteries that do not only stand on their own, but also include elements of some ongoing subplots - such as Ada's absent mother, the mysterious tattoo of the "S." on the villain's arms, Charles' difficulties with his employer, and so on.  There is even a greater development on a comment that was made in the last book about Ada being the "second-cleverest" girl in London (and readers will know that Ada will not sit still for being second best!). 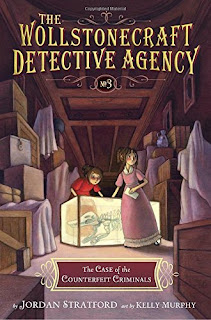 The Case of the Counterfeit Criminals picks up shortly after the last book - with Ada at home sick in bed due to her excursion with Mary out in the rain at the end of the last mystery. It is nice that the author maintains continuity within the books, and that actions and even what appears to be half-hearted remarks can come back to play something important in a later book.  Stratford remains faithful to the time period in which the books are set, as the doctor treating poor Ada is using leeches to remove the "bad blood" that is causing her fever.  As those of us now know, these loss of blood leaves her in a weakened state.

While the first several chapters deal more with Ada fighting off the fever and trying to gain strength so she can get back to doing what she does best - plus, the problematic appearance of her grandmother showing up at the Byron house to see that Ada is properly taken care of - which, needless to say, makes it even more difficult for Ada to find a mystery.  Of course, this book is the Wollstonecraft Detective Agency so it wouldn't be much of a mystery without one to solve.  Stratford is sneaky enough to start it off with a simple enough case - a missing dog.  But if the last two books are any indication, it's clear that the case will be more than just that.

There's a lost dog - but the lost dog is connected to an intact ichthyosaur skeleton that could potentially be faked - with a possible connection to the Sons of Bavaria, that might just be related to that mysterious "S" tattoo that Mary and Ada saw in the previous mystery, all of whom seem to be tethered to a certain Nora Radel - Ada's presumed arch-nemesis who may or may not exist.  Then there are the secret codes, the anagrams, the counterfeit messages, and just who or what in the world are the two human size puppets that appear and disappear in the blink of an eye?  Do they relate to the missing dog and the fake sea monster?

Once the mystery gets moving, it really moves - and with Kelly Murphy's wonderful illustrations, this book is another real winner in the realm of children's mystery series.  A fourth book is given a sneak peak at the end, yet no title is given, and I can't find any reference to a title or release date on the author's website, Amazon, or anywhere else.

RATING:  9 pieces of corpolite out of 10 for taking small bits of reality and once again creating a wondrous fictional tale!
Posted by TL at 2:43 AM