The Boxcar Children: Great Adventure 1 - Journey on a Runaway Train

Growing up, I can remember reading "The Boxcar Children" series of books from my school library.  Back then, there were only 19 books in the series, all written by the series creator, Gertrude Chandler Warner. I enjoyed reading the stories about Henry, Jessie, Violet, and Benny, four children whose parents died and who found themselves on their own.  They discovered an abandoned boxcar, which they quickly turned into their home.  Eventually, they found their grandfather, and he brought the boxcar to his property, so that the four Alden children could always have it as a memory of their first adventure on their own.

Fast forward to 2015, when I stumbled across an animated version of the first book, simply titled The Boxcar Children.  Having fond memories of the series, I picked it up and enjoyed it immensely.  At my local Barnes and Noble recently, I found that, like so many other ongoing series), the publisher has rebooted The Boxcar Children.  After 145 mysteries (there being a 15-year gap between Warner's last book #19 - Benny Uncovers a Mystery and the first of many books written by unnamed ghostwriters), Albert Whitman & Company has now brought The Boxcar Children back to #1 with a new "Great Adventure" 5-part series.  I figured, what the heck - I loved them as a kid, let's see what they are like now. 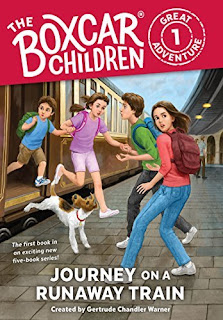 Journey on a Runaway Train, written by Dee Garretson and JM Lee, reconnects the children with their love of trains.  It's funny to note that just like Nancy Drew and the Hardy Boys, the four Alden children have not aged a bit - Henry is still 14, his sister Jessie is still 12, their younger sister Violet is still 10, and the youngest, Benny is still 6.  (However, when I did a quick search online about the series, I discovered that in the original series, Henry did age and go off to college in the eighth book, The Lighthouse Mystery - I didn't remember that at all).  Garretson and Lee provide readers with a pretty good set up for the mystery - a stranger shows up at the house with a flyer advertising an antique store, but the children and their grandfather soon discover that the stranger had an ulterior motive!  The antique trunk that stores the children's passports and other important papers has an odd new addition - a tiny painted ceramic turtle.  The family soon discovers that not everything is what it seems, and the children realize that there's a mystery to be solved.

The mystery quickly becomes an adventure, as the children are introduced to the Silverton family, who are involved in a very unique business - locating historical and ancient items that have been stolen and discreetly returning them to their original owners.  Where the story suddenly becomes out of the realm of reality is when the matriarch of the Silverton family asks the Alden children to basically become her agents and deliver a group of boxed items to a contact in New Mexico so that they can be returned to their rightful owners.  While I could find plausibility if this were a Hardy Boys or Nancy Drew mystery, where the teen detectives were in their upper teens and used to traveling around the world solving mysteries on their own, I find it highly unlikely and extremely unbelievable that such an important and most likely very dangerous task would be given to four children, three of whom aren't even teenagers yet!

Pushing that unbelievability factor aside for the moment, the plot does have some great moments.  There's an unexpected visitor on the train who tries to steal the items the children are supposed to be safeguarding.  There's some good, old-fashioned sleuthing in the library that hearkens back to days before cell phones and laptops that was enjoyable to read.  There's an intense chase at the airport and a sudden, unexpected take-off that leaves the children wondering if they've been kidnapped.  And readers will definitely enjoy following along with the children as they endeavor to unlock the clues they find.

I do give props to Garretson and Lee for writing the four children so appropriately for their ages.  The dialogue, the interaction, the reactions - everything about Henry, Jessie, Violet, and Benny coincides appropriately with their ages, so that none of them are out of character at any time (despite being thrust into a situation that is so totally inappropriate for four children of these ages).  The book ends with a set-up for the next in this "Great Adventure" series, a hook to hopefully entice readers to buy the next book in the series (which, I'll admit, I've already bought...we'll see how well it holds up against this one).

RATING:  7 pirates-turned-delivery-men out of 10 for reviving a love for a childhood series of books and remaining somewhat faithful to the original author's creations.
Posted by TL at 12:44 PM