A Ted Wilford Mystery, no. 1 - The Secret of Thunder Mountain

Can't really recall who turned me on to this series (James Keeline, perhaps?), but I remember reading a post about it, so decided to check it out.  Found that these reprints were available on Amazon for a relatively inexpensive price, so went ahead and bought the first five in the series (definitely have high hopes in the series to do so!).  Originally published from 1951 through 1967, this fifteen-book series features Ted Wilford, a young high school student whose older brother is a reporter for the local newspaper in their small town.  He, and his best friend, Nelson Morgan, go on adventures and end up solving mysteries along the way. 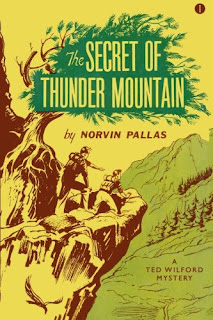 The Secret of Thunder Mountain introduces readers to Ted and his older brother, Ronald.  We also meet Ted's best friend, Nelson, as well as Ted's love interest, Margaret Lake.  We  see the Wilford brothers' mother once or twice, but the only thing we learn about her is that she is more then consenting to her two sons traipsing off into the mountains on their own to search for a fabled gold mine.  Otherwise, she has no prominence in the story whatsoever, and one wonder why she is even in the story (except to perhaps show that the boys have at least one living parent).  Another character we learn a bit about is Ken Kutler, who is not only Ronald's competition in the reporting world (working for a competing newspaper in a neighboring town), but he is also an old friend of Ronald's.  In fact, Ronald is featured so much in this story, it begs the question - who is the true protagonist - Ted or Ronald?

Why do I say this? Well, the author has a tendency to switch points of view throughout the entire story, at some moments, within the same paragraph.  While the book is told in third person, there are times where we are reading the story through Ted's point of view (which would make since, since this is toted as being his mystery series), but there are nearly just as many times where we find ourselves readying the story through Ronald's point of view (and Ted isn't even in the picture). An early example can be found on page eight:

Ronald sat back in the large swivel chair. "Now what's on your mind?"

"Ron, I want to get an interview with Old Goldie for our school newspaper." Ronald's reaction was the same as Nelson's; he, too, whistled. "That's going to be tough. I suppose if you do find him, you think he'l tell you all about his mine, and everything else you want to know."

At first glance, it appears Ronald is doing all the talking (grammatically, at least, that is what it is). But, when you read it, you see that the second paragraph begins with Ted talking - the only thing is, the author not only doesn't identify Ted as the speaker, but in the same paragraph immediately switches over to Ronald.  There are a number of instances throughout the book where speakers change without warning in the same paragraph, causing a bit of difficulty in following who is saying what.

Now that I'm done critiquing the grammatical aspects of the book, let's look at the story itself. I'm the first to admit I'm not a huge fan of boys' mystery series.  For the most part, I find them more about adventure and less about the mystery, and quite frankly, I buy mystery series for the mysteries.  Admittedly, this book gets off to a slow start, and by all rights would have bored me to death (considering it clearly started out as a treasure hunt for the fabled gold mine of Old Goldie); however, the further into the story I read, the more I began to actually like Ted and his friend, Nelson, and I began to root for them to find the gold mine.  Sure, the mystery itself was more than just where is the gold mine - there was also who exactly was Old Goldie; how does the young crippled boy Tim fit into all of it; how does the photograph of the cabin and the strange coded message lead one to the gold mine; is that Indian sidekick of Old Goldie really back in town; and what exactly does Mr. Gumber really want?  The further into the story you get, the more the mysteries start to come into play and the more I found myself wanting to see this through to the end right along with Ted and Nelson.  The conclusion is logical and satisfying, and overall, I'd have to admit it was worth the read.

Apparently the author, Norvin Pallas, was a huge fan of puzzles, and as the author of several puzzle and code books, it should come as no surprise that there is a unique code within the mystery that plays an important part of discovering where the hidden gold mine is.  Otherwise, there is not much information out there about the author. 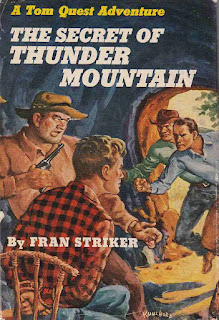 One thing that I thought was rather interesting - this book is not the only children's series to use The Secret of Thunder Mountain as its title.  There is a Tom Quest book that shares the same title (having never read this series, I can't tell you what it's about), and, oddly enough, there is a Hardy Boys board game based on the 1970s' television show that is titled The Secret of Thunder Mountain. Apparently, Thunder Mountain was a popular place to be, and it certainly held its fair share of secrets to be used in not one, not two, but three separate series! 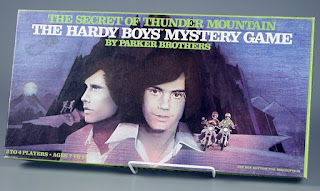 On a final note, there is a rather humorous thread running throughout part of the book that involves Ronald's car (which seems to be an old jalopy).  Ronald and Ted have affectionately named the car "Jeremiah," but yet when they refer to the car by pronoun, it becomes "she" and "her."  The scenes and dialogue surrounding Jeremiah are cute and brought a smile to my face as I read them.

Do I recommend the series?  Based on this first book alone, I'd give it a good maybe.  After I read a few more in the series, we'll see what my answer is then.

RATING:  6 wiggling ears out of 10 for making me think that quite possibly these mystery stories for boys may not be all bad.