As you may have noticed, I have been listening to a lot of Dark Shadows audio books lately.  Between the trip to Miami for SuperCon, and then the much longer trip to Kentucky to attend a funeral, I've had plenty of driving time, so lots of opportunity to plug in a CD and listen to the citizens of Collinsport come to life!

This next drama, The Happier Dead, had a great premise - what if there was suddenly a day where no one died, no matter how damaging the injury or disease?  (Torchwood fans may remember this as the theme to the "Miracle Day" mini-series by Starz)  Well, when Amy Jennings is rushed to the hospital for abdominal pain, she awakes to find that her appendix was removed, and she will recover.  What she doesn't expect is to find that no one else in the hospital has died that night either - from car crash victims to cancer patients - no one!  She begins to investigate with the help of her boyfriend, Simon Turner, who seems intent on joining her in her quest to put an end to supernatural terrors as they occur. 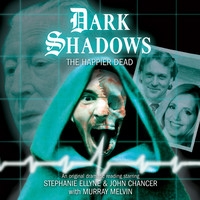 I like the idea of Amy becoming a sort of ghost-hunting Nancy Drew-esque character.  With her growing knowledge of the supernatural and arcane, and her spunkiness and determination, the writers have developed a very likable Amy Jennings.  And the continuing subplots within these audio dramas, as well as the use of more than just one or two actors in each story (as seemed to be the standard in the early audios), keeps my interest peaked and leaves me wanting for more at the end of each story.

I also liked the character of Dr. James Balthazar.  This is one character that I could have easily seen becoming a very worthy protagonist in the Dark Shadows mythos.  He is unfriendly, secretive, and definitely suspect.  His actions in this story came as a surprise, considering his personality and the initial build-up of his character.

Now, what I did NOT like about this particular story is the excessive use of cursing.  An occasional "damn" or "hell" I can overlook.  Even an emphatic "bitch" once in a great while can be passed over.  However, the writer of this drama (Adam Usden) seemed to rely quite a bit on expletives such as "Jesus" and "Christ" and "G**damn" and such.  Several of the characters used them, including Amy Jennings!  Now, I'm not a prude by any means - but one of the things I have always enjoyed about Dark Shadows is the fact that it was not your typical soap opera. Sure, they were some love triangles - but the storylines did not involve abortion, blackmail, rape, and your typical daytime stories; instead, they relied heavily on the tropes of horror tales of days gone by - werewolves, vampires, frankenstein monsters, time travel, parallel time, the phoenix, and so on.  Another thing easily noticeable about the show (and, of course, this could be more because of the era when it aired) was the fact that there was little to know swearing in the show.  Throwing words such as "Jesus Christ" and "G**damn" around unnecessarily does not add to the story at all; rather, for me anyway, it took me out of the story and, well, it annoyed me.

Aside from that, the story was well-plotted, and the ultimate villain behind the supernatural event actually surprised me - not at all who I thought it was.  And poor Amy, she just can't catch a break when it comes to meeting men (without giving too much away, I will say that Simon is NOT the villain of the tale).  Hopefully, one of these days, one of the writers will give her someone that won't betray her, try to kill her, or die on her.

RATING:  7 undying corpses out of 10 for keeping Amy on track with her supernatural investigations!
Posted by TL at 3:43 PM