The Mysteries of Maisie Hitchins, Book 4 - The Case of the Feathered Mask

Maisie Hitchins is back, and this time, she's helping one of her grandmother's borders find a one-of-a-kind feathered mask that was stolen!

Author, Holly Webb, provides a fun little mystery here; but, more than that, Webb continues with her fantastic characterizations.  Maisie may only be twelve, trying so desperately to live in a grown-up world, but she's strong-willed and determined, and with the help of the butcher's boy, George, she works out the clues to find the professor's missing mask.  The interaction among the characters, the distinct and different "voices" of each of the characters, and the anything-but-stereotypical supporting cast make for easy, enjoyable reading - even if it is a children's book! 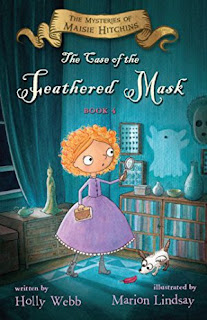 One other thing that Webb manages to convey in her story is the subtext of not being so judgmental.  Maisie is quick to judge a man who she has caught outside the house, condemning him as a thief when he turns out to be anything but!  And the museum director, as well as the police, are quick to judge a foreign boy they see go into the house with Maisie, all based on the fact that he is dark-skinned.  Without beating readers over the head, Webb adeptly shows her readers that you simply can't judge a book by its cover (which could apply to this series as well!).

The cover and internal illustrations by Marion Lindsay is still a bit too "stick-figurish" for me, and perhaps that's simply because I'm older.  Perhaps the younger readers of today won't find the art as garish as I do; yet, it's not so bad as to distract me from the story.  I do, though, have to give Lindsay credit, for she stays so accurate and detailed with the story, that no matter which illustration you look at, you'll find that it details specifically what is happening in the story - from background items on the wall to the clothes and hairstyles of the characters.

And this little mystery provides a surprise for Maisie (and readers!), for she receives a letter from her father (remember, up until now, Maisie has been living with her grandmother, and there has been little to no mention of her parents at all).  He has been away at sea for so long, but he is coming home!  I'm guessing he will likely show up in the next book - although, judging from the author's website, it may be after that!  While Amazon only has one more book listed (book 5), the author's website shows a total of eight books: meaning that there may still be three more books to come after the next one!  That is good news indeed, as children should have well-written, engaging mysteries such as this to read - book that are not dumbed-down or simplified, as if children ages 7 to 10 are incapable of reading complex sentences and plots.

RATING: 8 bacon-eating giants out of 10 for showing us that even children's books can have believable characters that jump right off the page!