Nancy Barrett returns to the audio dramas in Curtain Call, the latest Dark Shadows CD that I recently listened to as I traveled to Miami.  This time, she is playing Leticia Faye, who is the cousin of Pansy Faye's mother.  Leticia Faye has the gift of sight, but she has been doing everything she can to avoid the visions, focusing instead on her life as the high society wife of Desmond Collins.

This story is a break from the recent continuing stories involving Maggie, Amy, and the citizens of Collinsport.  Now, listeners are transported back to 1857, where Leticia is trying to learn to speak and act as one of the affluent New Yorkers, so that she won't be a continued embarrassment to her husband.  But, as always, one's past always has a way of catching up, and for Leticia, it is her gift of seeing the future that comes back to haunt her. 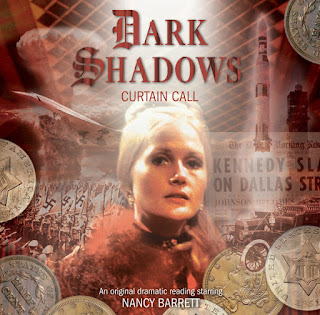 Enter:  Joshua King.  He's a man of incredible persuasion, and he is inciting the poor, downtrodden, and unfortunate people of society to rise up and rebel against the rich, aristocratic, and selfish upper class.  It's a revolution King is wanting, and a chance meeting with Leticia Faye seems to be the answer to his prayers.  Here is someone who has real insight, who can really see into the future and can help change his act of charlatan tricks into truth and reality!  Leticia is resistant at first, but the more she gets up on the stage, the more she finds herself pulled back into the limelight.

The question is - is Joshua King everything he claims to be?

As Leticia has more and more visions of the future - of flying metal birds with people inside, of massive troops of soldiers, of many other futuristic events and things - she begins to doubt what she is being told.  And, in true Dark Shadows fashion, the supernatural suddenly comes into play, and Leticia finds herself a mere pawn in a much larger game being played.  And thus, from New York to Collinsport, Leticia finds herself back at Collinwood, as King forces her to take him to the stairway into time so he can finally gain control of time itself and ensure a future where he is lord of all!

While not exactly one of my favorite audio tales to date, the story is a nice breather from the ongoing terror that has beseiged Collinsport as of late, and I enjoyed Barrett's spunkiness with Leticia's character,  There is not a lot of references to other Dark Shadows storylines within this tale, although there is mention of Desmond having shot Gerard Stiles.  There are several historical references - such as James Buchanan being President and the sinking of the S.S. Central America.  A little infusion of truth into fiction can only further bring the story to life.

The brief snippet at the end promises a return to Collinsport, as we resume the ongoing drama of its citizens and our familiar case.

RATING:  7 nosy gossips out of 10 for taking a lesser known character in the Dark Shadows mythos and providing her an opportunity to take the spotlight.
Posted by TL at 3:26 PM