The Time-Traveling Fashionista, Book 3 - And Cleopatra, Queen of the Nile

I finally took the plunge and took one last trip into the world of Louise Lambert, the time-traveling fashionista.  This book came out in 2013, and there is no news nor listing of any other book in this series, so I can only assume that this is the final book (which is a shame, since it is a rather unique series).

This final entry into the series picks up right where the previous book left off, with young Louise Lambert shocked to discover that her own mother could very well have been a time-traveling fashionista in her youth.  She is unable to get her mother to admit to anything, so when Marla and Glenda send her another invitation, Louise is determined to pull the truth from them.  Instead, she finds herself tossed back in time once again.  Cleopatra, starring Elizabeth Taylor.  She has taken on the role of an assistant to the costumer designer - but instead of living out a dream job, Louise picks up a pearl necklace that sends her further back in time, where she ultimately lands in a very real ancient Egypt as a servant and confidante to the very real Cleopatra! 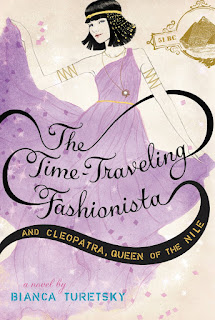 Louise wakes up to find herself in ancient Egypt - or rather, what she thinks is ancient Egypt.  Instead, it tuns out to be a movie set, and Louise is thrilled to find she is on the set of

The double time-shift is a new twist in this book, as previously the author, Bianca Turetsky, had only sent her protagonist on a single trip back in time.  The author has a bit of freedom in her storytelling this time around, as she admits in the afterward at the end of the book, since there is so little known about the early years of Cleopatra's life.  Turetsky's fashionista finds herself not only struggling as a servant (truly, a slave!), but also a witness to two vicious murders that no one in Cleopatra's time even blinks an eye.  And while Turetsky actually creates some growth within Louise's character in this book through her experiences with Cleopatra, at the same time, she leaves unresolved the dilemma regarding her feelings for Todd and Peter.

The book closes with Louise finally making contact with her fellow fashionista, Stella (whom she met in the previous book) and, at the time time, realizing she has received no more invitations to Glenda and Marla's vintage clothing sales.  Perhaps this was the harbinger of things to come (or not to come, as the case may be) - Louise never received another invite, and readers never received another book in this series.

Once again, the book has some beautifully painted color internal illustrations that, for the most part, highlight the fashions in the book - although, there are two 2-page spreads that showcase the movie set for Cleopatra and, later, the great city of Alexandria.  This is something that I will admit I miss from so many of children's mystery series these days - the internal illustrations.  For me, these illustrations always added something special to the books.  That is one positive thing about this series that lends it a more favorable light.

RATING:  6 poisonous asps out of 10 for providing some character development, as well as that double time-travel twist to shake things up a bit.
Posted by TL at 11:01 PM