Kelly Armstrong has me hooked!  I picked up the first book in this series, Omens, because the description gave me the same feeling I get when I watch Dark Shadows.  A supernatural saga with a real world setting.  Deceptions is the third novel in this ongoing saga of Olivia Taylor-Jones (who discovered in the first book that she is actually Eden Larsen, the daughter of two convicted serial killers!), and just as the prior two books, we not only learn a bit more about Olivia/Eden's past, we also learn more about the fae heritage from which she was born. 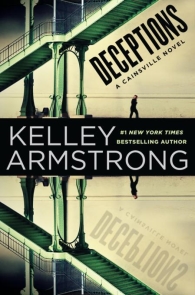 The book picks up pretty much right after the ending of Visions - Gabriel and Olivia are recovering from the car crash and the attempt by Macy Shaw to kill them both.  From there, the story keeps up the pace, as Olivia finds that she can't stay away from Cainsville and still learn what she needs to know about her own past and about whether her real parents, the Larsens, are truly guilty of the killing spree they are accused of.  Her visions continue, leading her to understand that not only does she play a part in the grand scheme, but also biker-boyfriend Ricky and her lawyer-friend Gabriel.  Readers discover, right along with Olivia, just how connected the three of them are and what their decisions will mean to the various factions of the fae living here in the real world.  Are they really controlling their own destinies, or are they mere pawns that will be forced to replay the same scenario done so many times before?

Of course, this book also brings to the forefront the killings of which Todd and Pamela Larsen are accused.  Without spoiling anything, the entire truth behind the killings comes out by the end of this book, and Olivia must find a way to come to terms with the truth - the truth of who instigated it, the truth of who really committed the murders, the truth of how those murders and her parents' actions are tied into the fae, and the truth of how those murders play into her own life.  The book is aptly titled, as there are quite a number of deceptions that finally stand revealed by the end of this book.  And, to give you fair warning, there is an unexpected death in this book that not only is integral to the continuing story here, but it also has an impact on Olivia.

I will admit, there was a bit more "romance" in this book than I would have preferred ... and Armstrong gets a bit graphic at points.  While I get that this series is likely aimed at females, and perhaps these type of scenes are somehow titillating to women readers, for me, they seemed needless distractions to the story (gratuitous sex scenes, if you will).  That being said, I'm still rooting for Olivia to end up with Gabriel!  (Poor, Gabriel, he just is too uptight for his own good!)

Anyone that loves supernatural thrillers is bound to love this series.  And even though I known pretty much nothing about the "fae" and about Celtic history, Armstrong is very careful about not just throwing things out there without giving some sort of history or explanation to the reader, so it's easily accessible.  Of course, this is an ongoing series, so it absolutely has to be read in order - Omens, Visions, and now Deceptions (with Betrayals being the next book that will be coming out).  It's my hope this series will continue indefinitely, but we shall see...

RATING;  9 boar's tusks out of 10 for keeping the roller coaster ride going, for keeping me guessing, and for a startling payoff in the end!
Posted by TL at 7:30 PM