I was so excited about the news that Donna Noble was coming back to Doctor Who - yes, it was only in book form (both audio and written), but I didn't care.  Anything to fill my fix for more Donna Noble!  In the Blood, a new novel by Jenny T. Colgan, is the first book featuring the 10th Doctor (David Tennant) and Donna Noble.  It goes without saying that I couldn't postpone reading this book, no matter how many books are in line ahead! 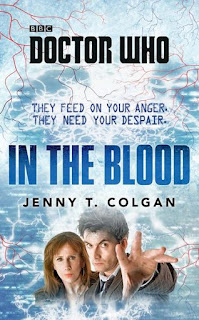 Perhaps my expectations were too high, or perhaps Ms. Colgan just really didn't get the characters as well as she should have.  But the Doctor / Donna in this book are not by any means the Doctor / Donna I have come to love so much.  I can see that Colgan made an effort to give Donna a sarcastic, bossy edge.  I can tell that she worked hard to make the Doctor bubbly and energetic.  But quite frankly, it just didn't work.  This book read nowhere near as well as the four books and four audios that have come before, all of which captured the true essence of both the 10th Doctor and Donna so wonderfully.  For me, neither character came alive in this story.

In the Blood finds the Doctor and Donna racing against time to stop a virus - one that starts out in the internet, but manages to infect humans, feeding on their anxiety and anger, causing them to become so angry, so violent, that they die from heart failure (but not before feeling an icy finger touch their heart).  When Donna's grandfather, Wilf, becomes infected, it becomes personal.  Along the way, they meet and keep a careful eye on an alien mercenary who has been sent to find whoever is causing this infection and put an end to him.  The Doctor, however, intends to beat him to the punch, to avoid any more death.  Donna does prove herself to be invaluable, albeit uncertain and down on herself, but in the end, she comes through for the Doctor and proves once again just how important she is to the Doctor (and the universe).

It takes a bit to get into the story - it's not your typical Doctor Who tale, and there is quite a bit of death and killing in the book (considering the Doctor abhors violence and prefers peace and saving lives to taking them).  The story spans a considerable time, since they travel the globe without the aid of the TARDIS, and there are some jumps in time to avoid having to spend pages simply telling of their airplace, auto, and train rides.  The ending, though...well, the ending made me smile, and it gave me flashbacks to the last Donna episode.

I hope the upcoming books and audios will be considerably better than this - for as much as I love Donna, I don't want to see her written so poorly.  (And the author clearly is familiar with Catherine Tate as an actress outside of Doctor Who, as she throws in a couple of Easter Egg lines from Tate's variety show - when Donna talks about something being "for losers" and later, she makes the remark, "Innit."  Those familiar with one of Tate's characters from her variety show will recognize those lines immediately)

Never thought I'd be disappointed with a book with Donna Noble in it...

RATING:  5 diluted Rempaths out of 10 just for having a Doctor Who book with Donna Noble in it.
Posted by TL at 8:05 PM