Okay, while I was not entirely enthused with the previous book in this series, I can say that I found this third book to be a bit more enjoyable to read.  And while Ghosts of Belle Isle may not have had much of a mystery to it (nor did it have the treasure hunting adventures that the prior two books had), it does have something the first two books lacked - stronger characterization.

Perhaps the author, Steven K. Smith, is getting a better hold on his three main characters by this book.  Derek, Sam, and Caitlin are no longer cookie-cutter kids - instead, in this mystery, they actually read and feel very natural, both in dialogue and in action.  Which, obviously makes for a better read.  And once again, Smith provides a number of history lessons scattered throughout the story, this time involving the Civil War and the surrendering of the South to the North.  As the kids learn about Jefferson Davis and General Lee and the number of lives lost in the war between brothers, so do the readers.  Thankfully, Smith manages to integrate the history lessons pretty well into the story so that the reader does not feel like he or she is being hit over the head with it. 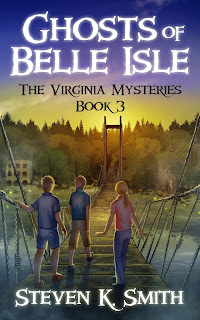 Now, as far as the mystery goes - as you can expect with a title like Ghosts of Belle Isle, there are ghosts.  Only, they are not the "ghosts" in the typical sense.  Sure, the kids' crotchety neighbor, Mr. Haskins, tells the boys about the mysterious lights that appear on the river that separates Belle Isle from Richmond and how those could possibly be the spirits of the hundreds of men who gave their lives for the South right there on Belle Isle.  The only problem is, the kids never really see those ghosts at all (albeit one very brief moment near the end); rather, the "ghosts" more prominently on display throughout the story are a motorcycle gang who appear to not only be rough and tough, but are also involved in some very suspicious and mysterious activities in the Hollywood Cemetery in Richmond.

I'd have to say this story is more of a typical "day in the life" type story - the kids' parents go away on a vacation, leaving them in the hands of an older cousin who pays little attention to them, leaving them to fend for themselves; they have to face bullies who are intent on making their lives miserable (although Caitlin does have the right attitude when it comes to bullies, and there is a scene at the end where the bullies get what's coming to them in a very deserving way), and having to face the consequences of their actions.  There are no really overly dramatic scenes, no big cliffhangers or foibles standard to the children's mystery genre, and no scary moments.  So, for those looking for a mystery to solve, or hoping for another "National Treasure" type adventure, this is not the one for you.  However, if you want a quick, nice little read, then you'll probably enjoy this one.

RATING:  7 Eiffel Tower snow globes out of 10 for good, clean family fun - would have preferred an actual mystery for the kids to solve, but hey - you can't have everything.
Posted by TL at 1:52 PM