A spin-off of Scholastic's highly successful Geronimo Stilton books, the Thea Stilton books tell the stories of Geronimo's sister, Thea (surprise!), who is a special correspondent for "The Rodent Gazette."  The Dragon's Code is the first in a series of mysteries wherein Thea is invited back to her former school, Mouseford Academy and finds help in solving cases in the form of five young mouselings - Nicky, Collette, Pauline, Violet, and Pam.  As with the Creepella von Crackelfur series, the books are aimed at early readers, with large font and plenty of internal color illustrations.  Readers also get the fun of solving the mysteries with Thea and her friends, as there are small magnifying glasses on pages that hold clues - whether those clues are in the illustrations or in the story itself, well, that's up to the reader to figure out! 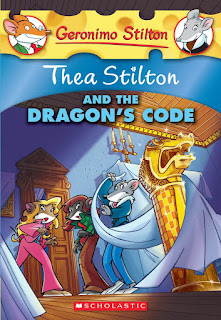 This first mystery finds Thea and the five girls searching for a missing student and the source of the various thefts around the school (including six cooking pots, a rake, and a water hose).  The clues lead them on a mysterious search into underground rooms and a secret entrance to a secret room that holds an unexpected treasure (and the answer to all of their questions).  It's a fun little mystery, and it definitely teaches children not only how to pay attention to even the smallest details, but it shows the value of working together to solve your problems, regardless of your differences.

At 159 pages, the page-count is more than that of the Hardy Boys books these days - although with the font and illustrations, the actual word count is considerably less. However, that is not to say that the story isn't just as readable and enjoyable.  The reading level is 3rd grade, which, quite honestly, is when I was reading the regular Nancy Drew books back in the day (along with the Boxcar Children, Happy Hollisters, and any other mystery series I could get my hands on in the library at the time).  So, I have to admit that it is a little disappointing to see that the reading levels have dropped so much in the past ... eh-hem ... "few" years.  When I was in school, this book would likely have been 2nd grade reading level.

As with the other Stilton series, this was originally published in Italy, written by Piccolo Tao, and the English translation was first published in 2009.  The author, despite the reading level, does provide a pretty intricate mystery involving secret rooms, a clever code, and an Indiana Jones-style treasure hunt that will no doubt enrapture children who read the book.  That being said, the author is careful to keep the clues at the forefront, reminding the readers now and again of what the clues are and how they are leading Thea and her new friends to the solution of the mystery.'

While clearly aimed at young female readers, I think the book would be enjoyed just as much by young male readers as well - there is little focus on the feminine nature of the characters (other than Collette, which is because she is a very high-maintenance girly-mouse) and more focus on the mysterious things going on at Mouseford Academy.

(One Side Note: while all of the other Stilton series, including Creepella von Cracklefur, are numbered, for some reason, Scholastic does not number the books in this series - so the only way to get them and read them in order is to look at publication dates to determine in what order the books were published...)

RATING:  8 booby traps out of 10 for providing an interactive children's mystery that lets the reader follow the clues to the solution right along with Thea Stilton!
Posted by TL at 4:01 PM