The Wollstonecraft Detective Agency, No. 2 - The Case of the Girl in Grey

Lady Ada Byron and Miss Mary Godwin are back in action as the Wollstonecraft Detective Agency - only this time, the agency has gotten a bit bigger, as Mary's step-sister Jane and Ada's sister Allegra join in on the fun.  I have to say that author, Jordan Stratford, appears to be having a lot of fun taking those two historical figures (Ada Byron being the real life daughter of that Lord Byron, while Mary Godwin grew up to marry a certain Percy Shelley and, well, I'm sure you know who she is...) and sending them off on this adventures to solve mysteries in the small little world of London around them.

While the historical facts may be somewhat off (in reality, there was an 18-year age difference between the girls, Allegra died at the age of 5, and Jane was actually Allegra's mother!), I have no doubt that Stratford has the girls' personalities down pat.  Ada is so literal and analytical, while Mary romanticizes things more.  Yet, they both have one thing in common - they are ready and willing to help anyone in need. 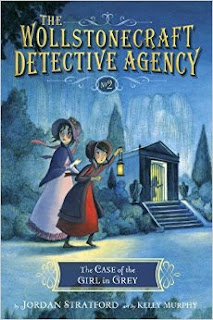 Stratford crafts in The Case of the Girl in Grey an almost Nancy Drew-like tale, in that there are two mysteries.  The first involves a mysterious girl dressed in grey that is nearly run down by a coach in which Mary and her friend, Charles (as in Dickens - yes, that Dickens) are riding.  When Mary tries to help her, she disappears, and Mary wonders if she has seen a ghost.  Meanwhile, Ada is asked by Mary Somerville (of whom Ada thinks very highly and is awestruck to actually meet in person) to look into the circumstances surrounding her cousin's daughter, who is engaged to be married.  While she is not quite sure what it is, Somerville feels there is something wrong with that engagement.  So, with no clues and no real idea of whether anything is truly wrong, Ada and Mary agree to take the case.

The story really starts to take shape when Ada and Mary meet young Lizzie Earnshaw and Mary mistakes her for the "ghost" that she and Dickens saw earlier.  Longtime mystery fans will immediately recognize that this marks the beginning of a connection between the two mysteries, and it isn't long before both Ada and Mary start to connect the dots.  Even young Lizzie suspects something is amiss about her engagement, as a friend of her uncle is the one who introduced her to her betrothed, and now is demanding she sign over all of her estate to her fiance before the wedding even takes place.

While there is no real mystery as to who the villain is, there is a much bigger mystery involving the reasons behind their actions and the connection that mysterious girl in grey has to Lizzie and the whole marriage scenario.  I enjoy the fact that Stratford basically leads readers through all the clues as Ada and Mary stumble upon them, decipher them, and connect them, and in true Nancy Drew fashion, the girls not only solve the mystery and save an inheritance, but they reunite long-lost relatives!  And the elements of humor that play into the story through the involvement of acrobatic Allegra (who wants to join the circus) and prim and proper Jane (who knows anything and everything about anyone who is anyone) make for a thoroughly enjoyable read.

Another big PLUS factor for this book (and this series) are the absolutely gorgeous internal illustrations.  Kelly Murphy does not only a magnificent job painting a beautifully mysterious cover, but she provides black-n-white pencil interiors that maintain the spooky, gothic feel of the mystery itself.  I'm definitely going to have to see what other work this artist has done.

RATING:  9 flaming snapdragons out of 10 for keeping gothic mysteries alive and well and enjoyable to read!
Posted by TL at 1:24 PM